Should refs call players by name?

The green team was about to play red in a high school summer league game. Green’s keeper was wearing a red shirt so I asked him to change his jersey. He said that he did not have another jersey and the green coach did not have pinnies so he asked the red coach for a pinnie -- but he did not have any either. The keeper told me that there was not anything he could do, so I told him, “Hector, if I can remember your name, you can at least change into another jersey.” 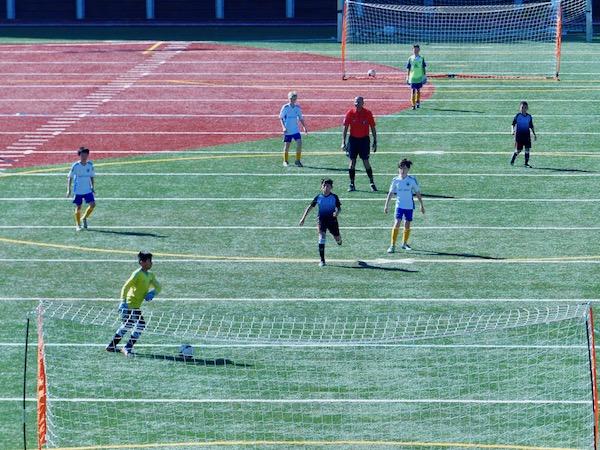 A minute later, he received a light blue Manchester City jersey from a teammate that he wore during the game so he could play. While calling him by his name helped in that case, does it help in other situations?

In the 1990s, I officiated college games with a colleague who refereed matches in the early days of MLS. In our college games together, if he was in the middle, he would go to the colleges’ websites a few days before the game and memorize the number and the players for both teams. And he would address the players by first name during the game.

He believed this really helped him on the field with game control as his brief discussions with players became more personal since he addressed them by name, plus they wondered how he knew who they were.

While that might have worked for him, memorizing player names and numbers seems like an awful amount of work that could be better utilized by extra fitness routines and knowing the intricacy of all the rules.

For years, I did not address any players by name, even though last names are often on the back of the shirt over the numbers. During the past couple of years, I have changed my routine when officiating teams that I know equally -- either having officiated both teams a good deal or not officiated them at all.

Even if the refs have never officiated the teams, the first name of a few players can become obvious, more so to the person in the middle than the two assistant referees. That’s because some players are on the ball a good deal and their name keeps getting called by their teammates and coach. For one example, the center midfielder.

The name being called is the first name and sometimes a nickname. Very rarely do players call each other by last name. In preparing this article, I remembered in the dark recesses of my mind officiating a girls U-10 game a decade ago and the coach of one of the teams calling each player by her last name, which was unusual and rather disconcerting, particularly for 9- and 10-year-old girls.

So, during the past couple of years, I have called players whose names I learned during the course of the game by their first name, and not a nickname or last name (which I could botch the pronunciation of). And this has made my brief discussions with them more personal and seems to help me just a bit with game control.