With its sixth big win at the Concacaf Championship, Coach Tab Ramos' team clinched a spot at the 2019 U-20 World Cup in Poland next May. 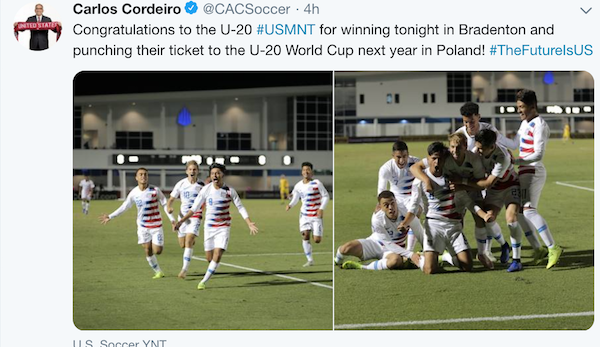 In the marathon qualifying tournament -- the USA will play Mexico or Panama in the final on Wednesday if it at least ties Honduras on Monday -- a 4-0 win over Costa Rica clinched qualification for the USA, which since Ramos took the helm has now qualified for four straight U-20 World Cups after failing in 2011.

Alex Mendez's 15th-minute goal was the first Costa Rica had conceded in the tournament after five straight shutouts. Ulysses Llanez scored four minutes later for his tournament-leading seventh goal. Juan Pablo Torres and Ayo Akinola struck in the second half.

The Ticos committed 24 fouls (the USA 18) and were cautioned four times (the USA's Sergino Dest and Brandon Servania were also cautioned). Llanez left the field injured, replaced by Akinola, in the 30th minute. Dest, who plays for Jong Ajax, the Dutch club's second division team, replaced Jaylin Lindsey, who was scheduled to start at right back but sustained an injury during warmups.