A 3-0 loss to defending champion North Korea means the USA will have to beat Germany on Wednesday to ensure passage to the knockout stage of the U-17 Women's World Cup. A tie against the Germans could also be enough for Coach Mark Carr's team if North Korea and Cameroon also tie, and the USA scores two more goals against Germany than the Koreans do against Cameroon. 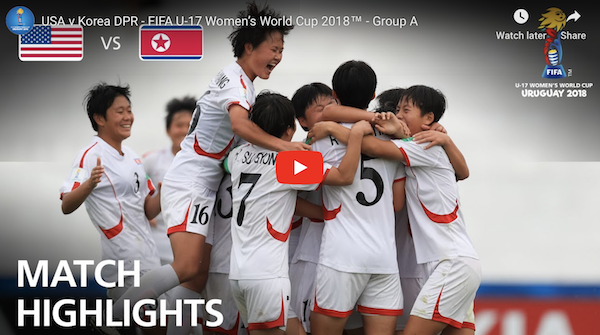 Dismal corner kick defending. The Americans managed to win its opener, 3-0, against an rough, high-fouling Cameroon team. But they never found a rhythm against the swift-passing Koreans. Too many U.S. buildups ended with a poorly hit pass and U.S. strikers rarely saw the ball as North Korean goalkeeper Yu Son Gum needed to make only two (easy) saves. The slight edge the USA had in possession was thanks to passing that occurred far from the Korean goal.

All three Korean goals came after corner kicks, of which the Koreans had five. The second came directly from the kick. Kim Yun Ok beat Trinity Byars to a near post header. Goalkeeper Angelina Anderson's dive came up short and Smith Hunter, who was guarding the near post, flinched instead of getting into the ball's path. The other two came after penalty area scrambles. Ri Kum Hyang made it 1-0 with a polished 12-yard strike after failed U.S. clearances. On the third goal, the U.S. defenders allowed Pak Hye Gyong's corner kick to land in front of Kim Kyong Yong, who struck emphatically into the lower right corner from 13 yards. 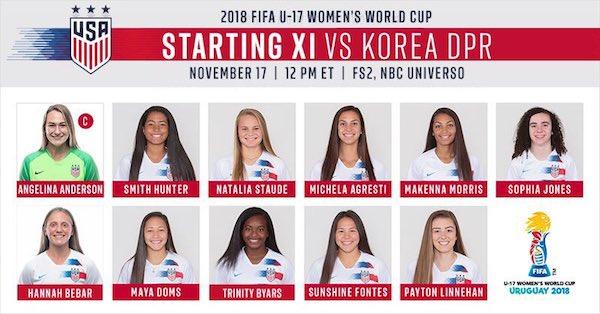 A big save. Kim Yun Ok skipped over a slide-tackle by Sophia Jones late in the game for a one-on-one with Anderson, who managed block the shot with her right arm and prevent a higher defeat.

The biggest loss. The 3-0 loss marked the largest margin of defeat for USA in the history of the biennial U-17 World Cup that launched in 2008. Not since the inaugural tournament, when the Kazbek Tambi-coached U.S. team finished runner-up, has the USA managed to reach the knockout stage. But not until Saturday has the USA lost a game by more than a single goal at a U-17 World Cup.

Next up. Germany opened with a 4-1 win over North Korea but fell, 1-0, to Cameroon. The USA faces Germany on Wednesday in Montevideo at 3 p.m. ET (FS2 and telemundodeportes.com).