The USA's qualifying campaign for the 2019 U-20 World Cup got even better with a 1-0 win over Honduras that earned it a final date with Mexico on Wednesday. Coach Tab Ramos' team had booked its World Cup spot on Friday with a 4-0 win over Costa Rica and needed just a tie in its seventh game of the marathon qualifying tournament against Honduras on Monday for a chance to defend its Concacaf U-20 crown.

What mattered for Honduras. The Catrachos entered the game knowing that even a loss would qualify them for the 2019 U-20 World Cup in Poland as long as they didn't concede four goals. They hardly bothered to attack. The USA had 66 percent of the possession but few solid chances against the packed defense -- Sebastian Soto squandering the best first-half opportunity when he shot straight to keeper Oscar Reyes in a one-on-one. Ayo Akinola gave the USA the win with a 51st minute strike -- his seventh goal of the tournament.

What mattered for the USA. Having already booked its World Cup ticket, the USA's aim was to reach the final to defend its first Concacaf U-20 title, of 2017, when it beat Honduras in a PK shootout after a scoreless tie at the Costa Rica-hosted tournament. Wednesday's final (6:50 pm ET, UDN, Concacafgo.com) will be a rematch of the 2013 final, when Ramos' team fell against host Mexico, 3-1, in overtime.

It also comes in an era when Mexico is heavily recruiting the USA's Mexican-American stars, of which there are several on Ramos' team. Ulysses Llanez, for instance, spent time with Mexico's U-15s before returning to the U.S. program. Llanez sat out the Honduras game with a foot injury suffered after he scored his seventh goal of the tournament in the win over Costa Rica. Alex Mendez has scored six goals for the USA. Both were LA Galaxy academy teammates of Efrain Alaverz, who plays for Mexico's U-17s.

Before the Honduras game, Sebastian Soto, son of Chilean-American father and a Mexican-American mother, told Soccer America about looking forward to a final against Mexico: “Obviously my family is going to be there cheering on the U.S. My Mexican grandmother was talking to Tab and made a joke that she was going to be cheering on both sides. We were laughing. It would be great if we end up meeting them in the final.”

The most famous player in the Mexico-USA tug-of-war is, of course, Californian Jonathan Gonzalez, who is not part Mexico team in Florida because he's a starter with Monterrey, but has said he hopes to join El Tri for the U-20 World Cup.

Fair play tiebreaker sends Mexico to final. After El Tri's 2-2 comeback tie with Panama, Mexico was even with Los Canaleros on points, goal difference and goals scored, triggering the fair play tiebreaker. Mexico, with fewer yellow cards (5) than Panama (11) in seven games, thus advanced to the final to face the USA on Wednesday. 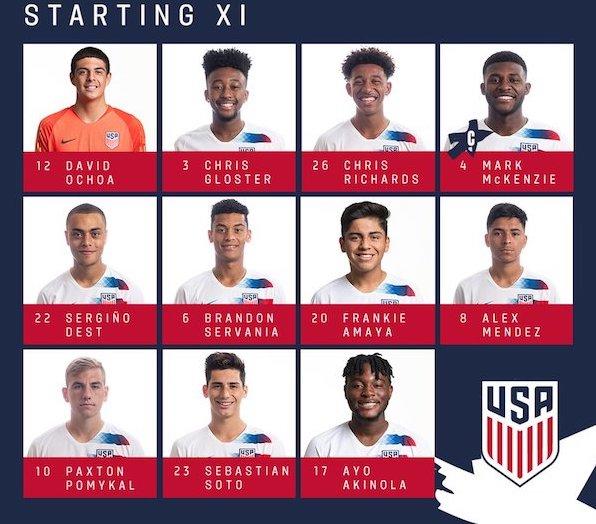