In November 2017, England’s men’s national team played two scoreless draws at home against Germany and Brazil, fielding an inexperienced side -- including several debutants -- in each game and changing much of the lineup from game to game.

A couple of those players made the World Cup roster a few months later. Others didn’t. The team reached the semifinals.

In November 2018, the U.S. women’s national team played two 1-0 wins in Europe against Portugal and Scotland, fielding a mostly experienced side aside from a couple of debutants.

And that was a greater degree of experimentation than we usually see from the U.S. women, a team that is infamously glacial in changing tactics and players.

In 2010, the year before Pia Sundhage led the U.S. women to the World Cup final, only 27 players saw any action for the team, and three of those played 45 minutes or fewer. Even the year before, two years out from a major tournament, only 19 players played more than 90 minutes in the team’s light schedule of eight games.

This year, in 20 games, Jill Ellis put 37 players on the field, including those first caps for NWSL vet Danielle Colaprico and North Carolina sophomore Emily Fox on the brief European tour this month. A few players shifted around, most notably Crystal Dunn, who can play anywhere on the field. (Given her height, goalkeeper might be a stretch.) 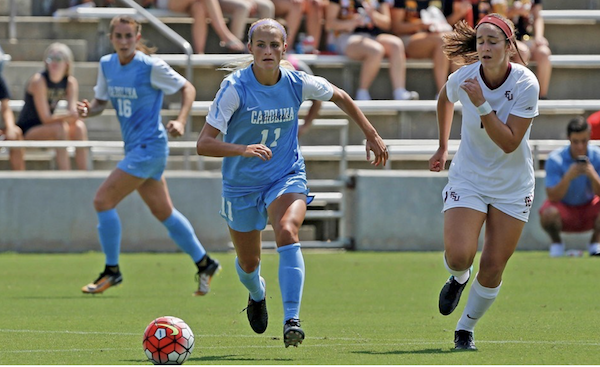 Such changes don’t necessarily sit well with the team’s fans. It’s not difficult to find social media tirades about Ellis’ experimentation. A national team is supposed to build “team chemistry.”

But with national teams, as with any team, form trumps chemistry.

Consider 2002 and the best World Cup run by a modern-day U.S. men’s team. Landon Donovan and DaMarcus Beasley were best known for their 1999 U-17 World Cup exploits before beating Portugal’s golden generation in the World Cup opener. Coach Bruce Arena caught Tony Sanneh in a career year, and changed formations on a whim during the Cup, busting out a 3-5-2 in the win against Mexico that propelled the team to the quarterfinals.

Besides, players need to be ready to step up in case anything happens. Injuries are an unfortunate part of the game, and that’s enough to prevent Ellis from locking in on 18 players, much less 11. Players might also make a strong return from injury, as John O’Brien did in 2002. Coaches may have to adapt on the fly, as Sundhage did after Abby Wambach was injured just before the 2008 Olympics, at which the USA won the gold medal.

And keeping the same people together may be a recipe for combustibility as well as chemistry. Hope Solo played the overwhelming majority of games in the 18 months leading up to the 2007 World Cup, only to lose her starting spot in favor of rusty veteran Briana Scurry for reasons the people involved are taking to their graves.

Granted, there’s a limit to pre-Cup tinkering. In 1998, Steve Sampson abruptly drafted in Chad Deering, Brian Maisonneuve and David Regis while switching the team to the ill-fated 3-6-1 formation. Those changes were considerably less successful.

But Ellis has shown she’s better off when she has options. The 2015 World Cup is a shining example, with Ellis shifting to a 4-5-1 formation and even adjusting to a less direct style in the knockout rounds. She didn’t find her best lineup -- Morgan Brian and Lauren Holiday in center mid with Carli Lloyd roaming behind Alex Morgan -- until the semifinals, and the team regained the trophy it had been missing since 1999.

We could say with Ellis’ current experimentation that there’s a method to the madness. Or we could say it isn’t madness at all.