A few days ago, I watched defending champion North Korea beat the USA 3-0 during the U-17 Women’s World Cup. The North Koreans dominated the game in all fronts even though they scored all their goals from set plays, namely corner kicks. The only dimension that I would think that our girls were better at was their athleticism. The 3-0 loss marked the largest margin of defeat for the USA in the history of the biennial U-17 World Cup that launched in 2008. USA had beaten Cameroon with the same score a few days before thanks in part to poor officiating.  The U.S. U-17s did not impress me there either.

(Before this article was published, Germany beat U-17 USWNT 4-0. I did not watch the game so I cannot comment on it. But even if our team moved on to the next round by beating Germany I would not have changed a single word of this article. Unfortunately, now I have to: the 4-0 loss to Germany is now the largest margin of defeat for USA in the U-17 World Cups)

On the other hand, the U.S. U-17s never have won the U-17 championship since its inception. They were runner-ups once (2008) and did not even play a semi-final since then. The USA did not even qualify for the U-17 World Cup twice (2010 and 2014) in a World Cup where up to three teams represent Concacaf (both times it did not qualify it lost in the semifinals on penalty kicks in qualifying competitions that sent only two teams to the finals hosted by Concacaf teams). North Korea won the U-17 World Cup twice, Japan, South Korea and France once. It is obvious that at this level we do not do well internationally. I have seen comments blaming the coach, Mark Carr, for the 3-0 loss. There might be merits to this criticism since all three goals were scored form corner kicks. One of the primary concerns of a NT coach should be set plays since in international tournaments lots of goals are scored from set plays. But I still personally think that the contribution of the NT coach is limited by the quality of her/his players. The quality of the players is a reflection of the player development system that converts them from raw talent.

Let us make the assertion “the contribution of the NT coach is limited by the quality of her/his players” clearer: When the USA lost the first two games in the 2016 Hexagonal, the Federation ended Jurgen Klinsmann’s contract and appointed Bruce Arena as the head coach. It made no difference the USA still did not make it to the World Cup 2018. The players mattered and some of the key players had reached their age of expiration. Even if U.S. Soccer has the funds to bring in the best coach on the planet, I doubt that the USMNT will reach the quarterfinals in Qatar.

Turkey lost to Sweden 1-0 in Turkey and was demoted to the C category in UEFA’s Nations Cup a few days ago. The starting lineup of the Turkish MNT had six players who were developed by different European youth development systems. Genetically and ethnically, all 11 players represent the demography of Turkey. Turkey has a population of 80 million whereas there are at most 6 million immigrants in Europe who have originated from Turkey: 80 million vs. 6 million and five players vs. six players. I think it proves my assertion: “The quality of the players is a reflection of the player development system that converts them from raw talent.” Although the two above given examples are for MNTs, I think the same is true for the WNTs. Both of my assertions are not logical tautologies, but are true under most circumstances. 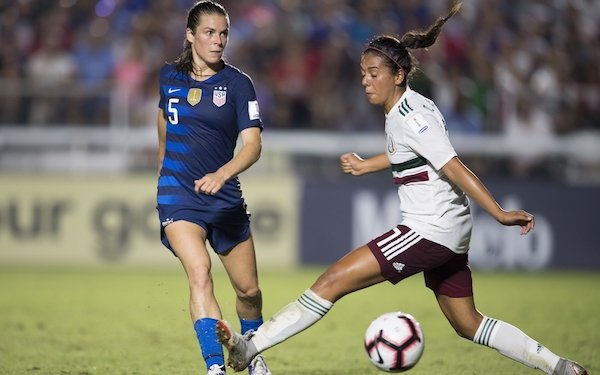 There is dominance in the international arena for the older age groups. There were nine U-20 Women’s World Cup so far and the USA competed in all nine. The U.S. U-20s were champions three times (2002, 2008 and 2012) and played three semifinals and two quarterfinals. The worst performance was this year; the USA couldn’t pass the group stage. (Germany won three times, North Korea twice and Japan once). As far as the World Cup itself is concerned, USWNT qualified to all seven World Cups, won it three times and at least played a semifinal in the others. (Germany won it twice, Japan and Norway once.) USWNT has won four gold medals and one silver medal in the Olympics. The worst performance came in 2016 with a fifth-place finish. (Germany and Norway won the other two gold medals)

If you look at the FIFA rankings you will see that the USWNT was ranked nothing but first and second since 2003.

At this level presently, USWNT performance can only be compared -- just a notch below -- to the Basketball USMNT in the Olympics – an unequalled domination.

How did we achieve this unequalled domination and is this sustainable?

The first and foremost reason is Title IX of 1972. The law triggered not only women’s soccer but all women sports through universities. The USA had a jump in women’s sports whether it is individual sports or team sports. In the 1970s and 1980s when women’s soccer started to bloom in clubs and especially in colleges in the USA, for the rest of the soccer world was still a men’s sport. England can claim to be the founder of soccer but that that soccer was meant for gentleman not for ladies. Remember the phrase “ungentlemanly conduct”! The USA can now easily claim to be the founder of women’s soccer.

Both the effect of Title IX and college soccer made the USA WNT to be the best by a good margin in the world in the 1980s and even 1990s. In those years, the only competition came from Scandinavian countries, Germany and to some extent from China. There were 61 years between the first men’s World Cup (1930) and the first women’s World Cup (1991). Today FIFA has more members than the United Nations. Men’s soccer has infiltrated all countries across all continents on the planet regardless of culture or religion but we cannot say the same thing for women’s soccer. There are still strong religious and cultural barriers between women and soccer. .

Our continuing dominance in the U-20 and Women’s World Cup could be explained by the widespread college programs in our country. Women find a very competitive environment to further their development. Only recently, we started seeing good high-level competitions in other countries; namely professional leagues or national amateur leagues. College women’s soccer gave us the edge for the older aged women groups along with the fact that we started women’s soccer decades before many countries.  Only in the last 20 years did the European and Asian countries start to invest in women’s soccer. This year’s relatively poor performance by the U-20s as well as the worst-ever finish in the 2016 Olympics might be disturbing signs of not being able to sustain our unequaled domination in women’s soccer.

For the younger age groups, our relatively poor performance in the U-17 World Cups can only explained by the fact that the problems that exist in men’s youth player development system are also prevalent in women’s youth development systems. One can also argue that the scouting is not done properly and that we do not field the best players in the age groups. Although I cannot rule this out categorically, I find it improbable. But it is a topic worth looking into. We are unfortunately not up to par in youth development in both girls’ and boys’ soccer compared to our competitors.

Until we have a coherent and integrated youth development system across all states, both genders will not be able to compete reasonably well with their counterparts from other nations. This might have a domino effect on our “unequaled domination” in women’s soccer. As I said earlier, “The quality of the players is a reflection of the player development system that converts them from raw talent.” Whether our socio-economic landscape from which we draw our raw girls’ talents is comparable to other competitor countries’ is an issue to be vetted. My gut feeling is that the girls draw their raw talent from families around the globe from similar socio-economic families. This gives us hope to sustain dominance in women’s soccer as long as we fine-tune our youth development systems. But our dominance in the years to come will no longer be “unequalled” like in the past.