Monday was the deadline for clubs not in the MLS conference finals to make decisions on players not already contracted for the 2019 season.

Since only a fraction of players are on guaranteed contracts, clubs have a lot of leeway about deciding who to keep, who to cut and who to keep in limbo, maintaining talks about a revised contract for 2019.

There has been a flurry of announcements ...

Chicago. The Fire exercised the contract options on seven players -- Brandt Bronico, Diego Campos, Stefan Cleveland, Elliot Collier, Jorge Corrales, Raheem Edwards and Nicolas Hasler -- though none started more than half of its 2018 league games. Only eight players had guaranteed contracts for 2019.

The Fire declined contract options on seven players, while Johan Kappelhof, Matt Polster and Bastian Schweinsteiger are out of contract. Brandon Vincent, who led the team in starts and minutes in 2018, retired, as did Christian Dean.

The Fire remains in negotiations with Michael de Leeuw, whose option was not picked up, Kappelhof, Polster and Schweinsteiger about returning next season.

Colorado. Kellyn Acosta was among four players whose options were picked up. They give the Rapids 18 players under contract for 2019. Eight players had their contract options declined, while two more are out of contract.

Columbus. In what will probably be one of Crew sporting director and head coach Gregg Berhalter's last moves before he is expected to become the U.S. men's national team coach, Columbus exercised the contract options on eight players and signed second-year defender Lalas Abubakar to a new contract, upping the number of players signed for 2019 to 22.

Among the five not retained were veteran midfielders Ricardo Clark, a 2006 MLS Best XI pick, and Mike Grella, a finalist for MLS Newcomer of the Year in 2015. The Crew remains in contract talks with Clark, though.

FC Dallas. In part because of its high number of Homegrown players under contract, FC Dallas already had 21 players with guaranteed contracts for 2019, to which it has added four players whose options were picked up: Jacori Hayes (pictured, right), Ryan Hollingshead, Victor Ulloa and Kyle Zobeck.

The six players whose options weren't exercised include Roland Lamah, who was tied with Maxi Urruti for the team lead in goals with eight in 2018. 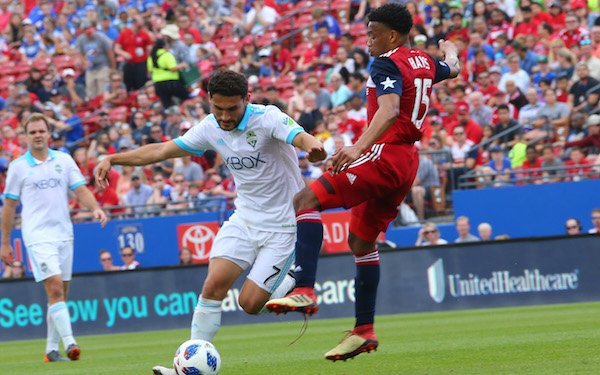 Houston. Honduran internationals Boniek Garcia, a member of the Dynamo since 2012 and its last trip to MLS Cup, and Romell Quioto were among 10 players whose contract options it picked up.

Adolfo Machado, a member of Panama's 2018 World Cup team, and five other players had their options declined. Arturo Alvarez, DaMarcus Beasley, Philippe Senderos and Andrew Wenger are all out of contract while Luis Gil's loan from Queretaro in Mexico is set to expire on Dec. 31.

LA Galaxy. After failing to make the playoffs for the second year in a row, a shakeup is in order in Carson. The Galaxy exercised the options on only four players -- Sebastian Lletget, Daniel Steres, Bradford Jamieson IV and Justin Vom Steeg -- but it is still saddled with the contracts of several high-priced players it will probably try to move.

Among those whose options were declined was captain Ashley Cole. Three other players are out of contract but in discussion for new negotiations: midfielder Chris Pontius, defender Dave Romney and midfielder Emmanuel Boateng.

Minnesota United. The Loons have 16 players under contract after picking up the options of six players. They also extended an offer and remain in negotiations with Eric Miller.

Among the nine players who didn't have their options exercised was Brazilian Ibson, who played 27 games in 2018. The moves leave only two players from the NASL days on the team: Brent Kallman and Miguel Ibarra.

In addition, Harrison Heath and Johan Venegas are out of contract, and Maximiano (Fluminense) and Alexi Gomez (Universitario) returned to their clubs upon the completion of their loans.

Montreal. The Impact has 24 players under contract after picking up the options on seven players. It did not exercise the options for Rod Fanni and Bacary Sagna and four others, but it is in talks with the French defenders, while David Choiniere will be invited to the pre-season training camp.

Vancouver. The Whitecaps exercised the 2019 contract options on seven players, giving them 17 players under contract for next season. The moves followed new head coach Marc Dos Santos' evaluation of the roster.

Vancouver didn't exercise the options on Stefan Marinovic, who started 24 goals in goal in 2018, and midfielders Brek Shea and Aly Ghazal, who played 28 and 22 games, respectively, as well as six other players.

With Kei Kamara and Cristian Techera out of contract and Alphonso Davies sold to Bayern Munich, the 'Caps don't have their top three goal-scorers on their 2019 contract.