When controlling the parents becomes problematic, leave them out

The U-16 All-Star team I coached this fall prepped for its tournament against a travel team. They looked amazing, and they could hardly stop scoring.

But maybe that wasn’t the best preparation for the tournament.

In that scrimmage, the 20 or so parents who attended sat politely in the bleachers, maybe clapping for a nice shot or save but saying very little. In the tournament, parents were a little more “involved.” That probably isn’t the reason that the shots that went sailing into the net in our scrimmages went past the post, over the bar or straight to the keeper in our tournament. But it certainly added to the misery.

Elite players, of course, need to get used to hearing a crowd. That’s one reason kids who went through the Bradenton residency and some Development Academy programs get a reputation for being soft. The audience for those games is a bunch of scouts taking notes, perhaps not the best preparation for rivalry-fueled college crowds, much less stepping out in front of the ultras in some European cauldron.

But even at Connecticut’s Morrone Stadium or the San Siro, you don’t have a steady line of parents standing five feet from the field. That’s what players faced in this tournament. Whenever a gap appeared in that line, a parent would move along to follow the action.

Heaven forbid any youth player go without a parent yelling “Shoot!” at a player on the end line with an angle that would be difficult even if five defenders weren’t standing in the way. Or the old classic “Boot it!”

Controlling the parents is problematic. Maybe the referees should at least back the parents up a few feet -- our field had a white line that would’ve been convenient, and it also had bleachers that went mostly unused. (Things will be different next fall when I’m reffing rather than coaching.) If a coach has some stature, he or she might be able to tell parents to shut it or their kid is going to get comfortable on the bench. That’s generally not an option for parent coaches, even the ones who want to get their parents to calm down. 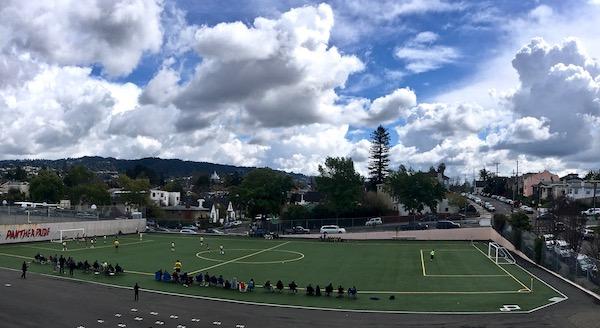 The more soccer-literate the parent, of course, the less likely he or she (let’s not kid ourselves -- it’s usually “he”) is to keep up an ear-splitting torrent of nonsense throughout a game. But even if the kids are sharp, the parents might not be. The most obnoxious parents I’ve heard in my brief refereeing career so far were from a team ranked near the top in its state, and I was flabbergasted to listen to ignorant outbursts from parents at a U.S. Youth Soccer national championship.

In competitive games, whether they’re local rec games or national championships, parents are going to be a persistent problem.

And that’s why we need to start playing some games without parents.

Maybe it’s a parent-free weekend in league play. Maybe it’s a closed-door scrimmage. Maybe it’s a weekly free-play session in which coaches divide the players into teams and just let them play. Ideally, the kids would be playing freely in their neighborhoods, but over-scheduled kids and over-scheduled fields are not conducive to such a thing.

Parents may gripe about it. But it’s not about them. The game belongs to the players, no matter how much exercise the parents get racing along the sidelines to offer their opinions -- or worse, to belittle a U-11 player who had the temerity to strip the ball from their little angels.

Besides, being a soccer parent is stressful. We could all use a week off, no matter how well-behaved we think we are. Go spend an hour at a coffeehouse or a library. Maybe go to the dry cleaners or the grocery store or wherever you need to go.

Your kid will be fine. I have fond memories of playing multiple sports growing up, and I can’t even remember if my parents were at all the games.

youth
5 comments about "When controlling the parents becomes problematic, leave them out".
Read more comments >
Next story loading