A decade ago, Kaz Tambi  coached the USA to a runner-up finish at the inaugural U-17 Women’s World Cup. It was the last time the USA reached the knockout stage of the biennial tournament.

At the full national team level, the USA has won three Women’s World Cups, is defending champion, and has reached the final four of all seven since the tournament launched in 1991. Since women’s soccer was introduced as an Olympic sport in 1996, the USA has won four out of the six gold medals and a silver.

We checked in with Tambi, now the NYCFC Girls Academy Director of Coaching, to get his impressions of the latest U.S. U-17s’ World Cup performance – and his views on whether the results at that level are of concern. Five of the players he coached during his two cycles as U-17 coach were part of the USA that stormed to the 2018 Concacaf Championship title to qualify for the 2019 Women’s World Cup. 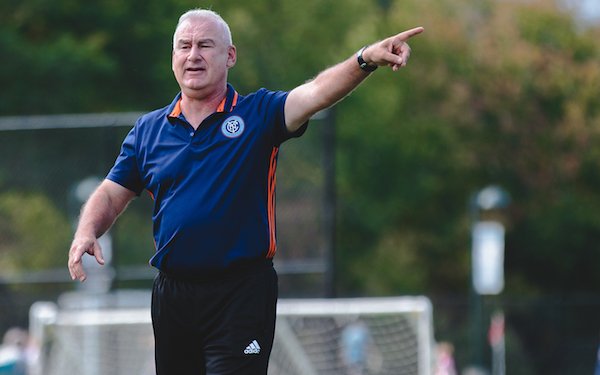 Kaz Tambi, who was on the 1984 Olympic squad and played for the NASL's New York Cosmos and in the ASL and MISL, served as head coach of Seton Hall's women's team and director of World Club FC before his current position as NYCFC Girls Director. (Photo courtesy of NYCFC)

KAZ TAMBI: First of all, it’s important to remember that this is the first major international competition for these kids. Most of them have never felt something like the aura of the occasion of a World Cup.

No matter how you prepare, talk about it, and try to simulate, there is no substitute, so for a 15-, 16-, 17-year-old it's a very big occasion, and sometimes I think an overwhelming one from a psychological viewpoint.

We went through that too, in 2008. But we were fortunate.

This [2018] group was unfortunate because the game they really should have won was the Germany game. They had tons of chances. That was kind of a strange game.

In 2008, Tambi’s team beat South Korea, 4-2, in the quarterfinals and Germany, 2-1, in the semifinals, to reach the final against North Korea. The Americans’ second-minute goal held until the North Koreans equalized in the 77th minute. The gamewinner came late in overtime.

KAZ TAMBI: The North Koreans come to a World Cup with a totally different mentality than the young American girl.

They were totally secluded. There was no interaction. You could feel on the field at that young age, those kids were kind of playing for their lives. Because North Korea is North Korea, behind the Iron Curtain, it's brutal world of oppression that those kids come from.

Literally, on the field, when they scored the tying goal and winning goal, they were all crying, right there on the spot.

With each one of their goals it was almost as if those these kids were relieved their families were going to get fed when they got home.

North Korea also won the 2016 U-17 World Cup, at which the B.J. Snow-coached U.S. team exited in group play. At this month’s World Cup, the North Koreans beat the USA, 3-0, which meant Coach Mark Carr’s team needed a win against Germany to advance. The Germans scored early. The USA responded by peppering the German goal without converting, and went on to lose, 4-0, as the Germans superbly finished their counterattacks.

KAZ TAMBI: If you look at the [2018] USA-North Korea game, you think, wow, we got a problem, because it was totally one-sided. Then you look at the Germany game, and you say, hey it wasn’t so bad. We had multiple chances to take a comfortable lead.

It was a very fluky game. In the first half, the Germans tried to play out of the back and kept coughing the ball up. The number of chances we had from 10 yards out! Give me those chances, and I’d say we’re going to win on any day. The German keeper also had a great game – fantastic point-blank saves.

Even within these three games (the USA beat Cameroon, 3-0), you come out with three different pictures. So, I think it’s a little unfair to have a big generalized answer as to where we stand as a country in youth soccer based in this latest U-17 World Cup.

For all of North Korea’s U-17 success, its full national team has not thrived. North Korea, which failed to qualify for the 2019 World Cup, has never gone past the quarterfinal stage and was banned in 2015 for doping. Results at the U-17 level, Tambi says, aren’t the gauge on whether the program is successful.

KAZ TAMBI: Ultimately the bigger test, the ultimate test, which is what the federation has always said, is how many of the younger players can get to the full team.

KAZ TAMBI: That's the overriding issue. I think the World Cup at the U-17s is a great introductory experience. The merits of winning or losing shouldn't be the end all at that young age.

I think by the time these kids get to 20 years old or later, they're very successful, because they've had experience, and they also go on to college, playing in big stadiums, in big games, NCAA finals. And so, a couple years down the road they're better psychologically prepared, as the years have demonstrated.

In his second cycle, Tambi’s team failed to qualify for the 2010 U-17 World Cup, which because Trinidad & Tobago was hosting the World Cup offered only two spots in Concacaf qualifying. The USA outscored its three first-round opponents, 32-0, but in that year's format qualifying came down to one semifinal game. Canada beat the USA on PKs after a scoreless tie.

KAZ TAMBI: My second group, believe it or not, was a better group than my first. But we had that crazy scenario with that one playoff game -- after taking everybody apart, including Germany, leading up to the tournament.

It was a great team. It’s a small tragedy you didn’t get to see that team play at a World Cup.

From that team, Lindsey Horan, Brian, who Tambi included in the 2008 team while she was a U-15, Abby Dahlkemper and Taylor Smith have gone on to the full national team.

KAZ TAMBI: Morgan Brian I brought in as a U-15. She had a different level of knowledge out there. “Knowledge” is the key word when you're looking at players for international competition. Morgan was ahead of the game in terms of seeing the game, besides having the other factors, from a physical view point and technical view point.

We have a lot of technical players -- but where we have to get better is knowledge.

KAZ TAMBI: They had to watch international soccer, including men's soccer, and send me emails with short reports on players who play in their position. They'd send me a weekly email with a paragraph on watching high-level games from Spain or England or Germany.

We need to help our young players get more knowledge and gain a better picture of what higher-level soccer looks like, by watching higher-level soccer on TV or in stadiums, and playing as much as possible against higher-level players and boys, so they can get insights on the points that make a difference in big competitions.

We all love to win, but even if the USA had won this last U-17 World Cup, we’d still be talking about the same needs in our girls’ game -- creating more knowledgeable players.

FURTHER READING: A Parent's Guide to Game Day and Practice -- from Kaz Tambi