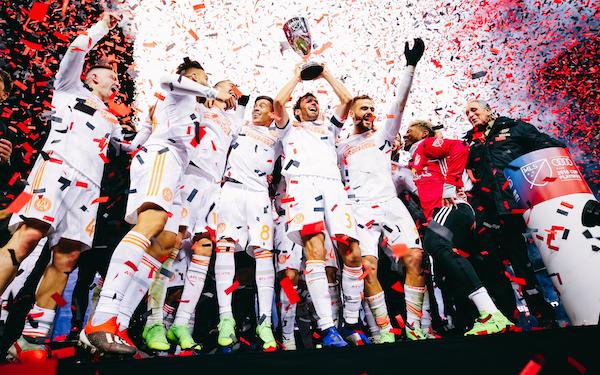 The wait will have to continue for the New York Red Bulls.

On Thursday night, they had to watch at home as Atlanta United celebrated clinching a berth in the championship game -- in only its second season.

The Red Bulls entered the playoffs with the best defense in MLS -- 33 goals allowed in 34 games -- but they lost in Eastern Conference final series to a team about which the big question mark was its defensive focus.

The Red Bulls dug a deep hole for themselves in the first leg -- 3-0 loss in Atlanta -- and never looked like getting out of it at home. By the time Tim Parker scored in stoppage time to give the Red Bulls a 1-0 win in the second leg, the suspense was long gone.

Atlanta wins with line of five. Atlanta United lost both games to the Red Bulls during the regular season -- 3-1 at home and 2-0 on the road -- but it's been a different team in the playoffs, giving opponents few opportunities. Until Parker's goal, the only goal Atlanta had allowed in the playoffs was on a free kick that deflected off an Atlanta player in the wall and went right to NYCFC defender Maxime Chanot to put away.

"In the final matches of the regular season," Atlanta United coach Tata Martino said, "the team labored and gave up too many goals, and it wasn't the way we were going to have success in the playoffs. So we were going to have to opt for a style of play that we had played during the season, which was the line of five, and it was the system that has given us the most security defensively. This has helped us be solid defensively on the road and dominant at home."

Red Bulls lose on preventable goals. The Red Bulls had goals (correctly) called back in both legs on Video Review, so if they had counted, they'd have been enough to even the series and send the Supporters' Shield winners into the final on their away goal.

But Coach Chris Armas was more interested in what might have been if his players had done a better job on the three goals Atlanta United scored at home in the first leg.

“Pressing, not pressing, we have to maintain our aggressiveness no matter where we are on the field, and you have to make plays,” Armas said. “Because if we just look at the individual plays of the goals, the three really good finishes — but we could have prevented all three of those. Things are tight in the playoffs, and it's about making plays, and we give them credit because they did, and we had to make a few more of those on each end of the field.”