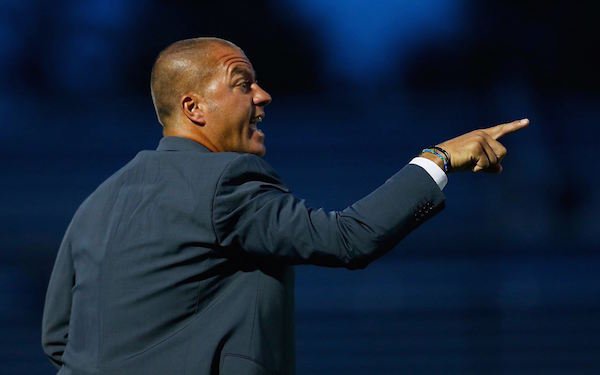 In his first year as a head coach in the NASL, Giovanni Savarese coached in a final in Atlanta, leading the New York Cosmos to a 1-0 win over the Atlanta Silverbacks at Soccer Bowl 2013 before 7,211 fans.

Ten times that number of fans will be on hand at Mercedes-Benz Stadium on Saturday when Savarese leads the Portland Timbers against Atlanta United in MLS Cup 2018.

In his first year as Portland coach after five years -- and four finals -- with the Cosmos, Savarese says finals are all similar.

“The same thinking process that you have and the more you’ve been there gives you experiences that you feel can help and things that maybe you shouldn’t have done that also give you that experience,” he said on an MLS Cup media conference call on Monday. “For me, the first year has been great to make it all the way because of work the guys have done. They believed all along that we could achieve this.”

He says his players relish the chance to play in a final and won't be intimidated by what will be a record crowd for an MLS final.

“These are the type of scenarios that you want to be part of," Savarese said. "This is what we talk constantly to the players and ourselves: we play for these moments. We play and give everything for our organization to make sure we can enjoy the moments where there’s something big at stake, where there’s a bigger crowd, where the challenge is monumental. These are the moments that the true good players, the real players, are built to show themselves. It’s exciting, we’re proud of what we’ve accomplished but we’re not satisfied just to be here.”

Still, Savarese is admiring of what Atlanta United has accomplished on and off the field in two seasons.

“I think Atlanta is what you hope an organization can be once you give them the opportunity to be part of MLS," he added. "I think they’re an example in different ways. I think they have a strong belief in the building of a team, they decided to bring a coach that brought a very interesting style that resonated with the people who went to see the games. The support of the fans in a city, that maybe in the past you would have questioned if it was going to be successful or not, they were able to build something great."