It has been my opinion for some 20 years or more that what American soccer needs is a hefty infusion of Latino talent and Latino ideas.

The arrival of MLS in 1996, and the careful selection of a limited number of star players to help kick-start the league was a promising moment. A handful of talented Latinos quickly made their mark -- Carlos Valderrama, Jorge Campos, Mauricio Cienfuegos, Raul Diaz Arce and -- particularly -- Marco Etcheverry.

This proved a false dawn, as the league rather quickly turned toward a physical, more European style of play. No doubt because not one of the original 10 coaches was Latino. We now have 20 MLS coaches. This past season four were Latinos, an improvement but not exactly a convincing one.

But there has been, over the past few seasons, a slowly dawning, almost reluctant it seems, discovery that Latino players -- particularly at the all-important creative No. 10 position -- can hugely improve their teams.

That’s hardly news for the four Latino coaches. They have, to different extents, gone with their soccer instincts and produced teams that their soccer heritage demands -- teams dominated by Latino players, teams that play Latino-style soccer ... futbol. For two of them -- the Venezuelan Giovanni Savarese at Portland, and the Argentine Gerardo Martino at Atlanta -- their insistence on futbol has quickly brought success.

In Atlanta’s final playoff game last weekend, five of the 10 field players were from South America, as were two of the subs. In Portland’s win at Kansas City, six starters and one sub were Latinos.

And it is those two teams that will compete for MLS Cup on Saturday. A tremendous success story for Atlanta, in only its second year of play, a terrific achievement for Savarese in his first year of MLS coaching.

Two teams that have not only been winning regularly, but teams that have been exciting and entertaining to watch. In many ways, this is what I have passed years waiting and hoping for -- a Latino final, a showcase game that would highlight the skills and thrills of futbol.

So maybe I should be dancing in the streets or shouting from the rooftops ... the appointed day has arrived! Of course I’m greatly satisfied with the way things have turned out ... but ... yes, always that cautious but ... lately, when we’re looking at grand finals, soccer has been giving us, one after another, some pretty awful games.

The 2010 and 2014 World Cup finals bordered on the tedious. While this year’s had more life, it never really took off. And so on. Would anyone want to sit through replays of the last two MLS finals, both featuring Toronto vs Seattle? An utterly vapid 0-0 tie in 2016 (Seattle won the shootout and so became champions without scoring a goal), a rather uneventful 2-0 win for Toronto last year.

Things can hardly get worse, Atlanta vs Portland is bound to look better than those games, but, really, here is an opportunity to give us a memorable game. Logically, that is what we should get. With goals. Atlanta, playing at home with over 70,000 fans roaring them on, will not be defensive, while Portland are coming off two remarkable road victories, against Seattle and Kansas City.

I doubt there has been an MLS final with so much attacking brilliance on the field. Atlanta has Miguel Almiron and Josef Martinez, a Paraguayan and a Venezuelan, two of the best attacking players ever to play in MLS. Portland can match that with a pair of Argentines, Diego Valeri and Sebastian Blanco. 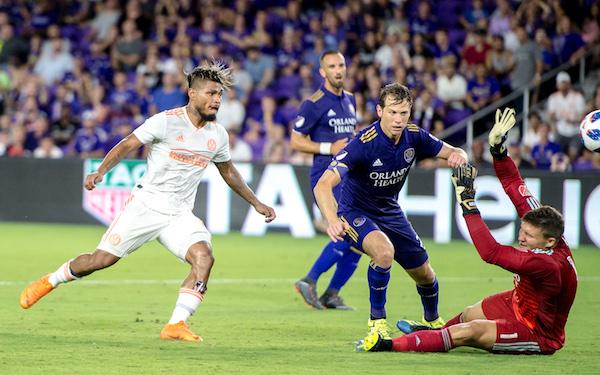 It’s worth pausing for a moment to gaze at all that talent: Martinez, who now owns the record for goals scored (31) in a regular MLS season; Almiron, he of the darting runs, the decisive goals and -- as on Atlanta’s second goal in the home game against the Red Bulls -- almost surreal passes; Blanco, at 30, a non-stop, diminutive, bundle of artistry and tricks, scorer of a tremendous golazo against Kansas City; and Valeri, another veteran, spry and silky as ever, scorer of a remarkable opportunistic goal after only 27 seconds to lead Portland to victory in the 2015 final, and another, equally sudden and stunning, against Kansas City last week.

And that’s just the cream of the crop. Both teams have formidable supporting casts. Yes, it’s all there, a real final, two first-class teams who must, surely, produce a first-class game.

For MLS, the first Latino final, a game that can show MLS, with its ridiculous subservience to mediocre European players and patterns, just what it has been missing all these years.

I can think of plenty of reasons why this should be a spectacular game and, really, none why it should be a bore. But of course, one has doubts. With soccer you never know.

Except that there is one thing we do know ... that even now MLS, and American soccer in general, are still having problems acknowledging the importance of the final as a futbol event. MLS itself, plus the various TV commentators, seem utterly incapable of admitting that the success and the excitement of Atlanta and Portland is a direct consequence of its Latino players.

It seems that futbol -- to borrow from gay terminology -- is the soccer that dare not speak its name. I have no idea why this should be so, but I have yet to read or hear a media assessment of this game, or of these teams, that highlights the dominant Latino influence.

Shall we get, as part of the TV buildup, even a short feature on futbol, something that might try to seek out and explain the essential nature of the Latino game, the quiddities that give futbol its essential futbol flavor?

Very doubtful. To do that would mean acknowledging, implicitly if not explicitly, the colossal mistake that MLS has been making for two decades by ignoring futbol.

Yes, I’m veering from mild caution to excessive optimism about this one. I have to keep reminding myself that, however much I may laud the futbol aspect, this is still a final, which summons up images from the rotten finals that soccer has been giving us for some time now (and one of those finals -- I think the worst I have ever seen -- was the 2016 Copa Centenario game, a futbol affair between Chile and Argentina … coached by Gerardo Martino).

Well, the hell with the caution. I’ll go with the enthusiasm -- with the belief that this will be, for all the right futbol reasons, a helluva game.

If not, it’s sackcloth and ashes for me.