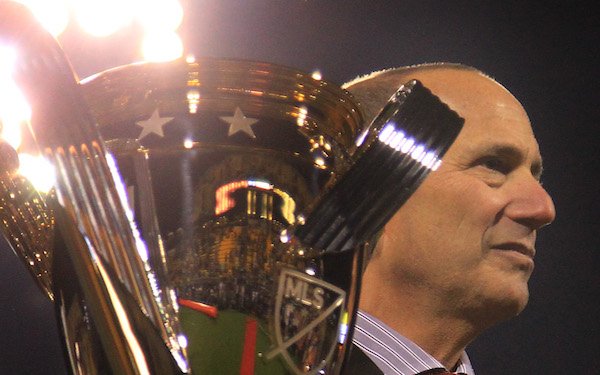 Commissioner Don Garber underscored the rapidly changing nature of Major League Soccer when he said in Friday's State of the League address in Atlanta that the league's model of selective spending on imports using the Designated Player and Target Allocation Money mechanisms and heavy investment in academies and training facilities are "unsustainable" if clubs don't get a return on their investment and the league doesn't become a "selling league."

That included Garber's assertion that the league's position on solidarity payments has changed  -- unthinkable just a few years ago.

Garber's comments come amid a new wave of MLS academy stars fleeing to Europe after they turn 18 when they are free to sign with European clubs for nothing. It comes as clubs are increasing spending not only for facilities but educational programs for young players, making them ready earlier for pro careers, like their young counterparts in other major soccer nations. But the better the the players they are producing, the more European clubs are coming to chase after them.

A Soccer America survey of U.S. teenagers leaving MLS clubs in 2018 shows 17 players moved to Europe and only Red Bulls star Tyler Adams moved for a transfer fee. Chris Richards is on loan from FC Dallas to Bayern Munich and may be sold in January. The list doesn't include St. Louis-bred Josh Sargent, who scored in his Bundesliga debut on Friday and whose territorial rights were held by Sporting KC.

"This is a big issue for our league," said Garber. "While I don't know that it's entirely about young players chasing their dreams as much as it's international clubs chasing our young players. That's something that we've got to wrap our collective minds around and figure out how do we manage that in a way that justifies our owners investing this year north of $100 million outside of our first-team rosters. "We are not, as a country, participants in solidarity and training competition. I think that probably has to change. We have to find a way that if that's going to happen, how do we at least get compensated for it. I don't know how we can justify making the kind of investments we've been making."

Garber acknowledged that the issue is legally complicated and FIFA may change its rules.

"I will say our view about this whole area is very, very different than it was two, three, four or five years ago," he added. "I think the product that we're developing has become some of the most important assets that we need to start figuring out ways that we're either protecting or we're finding ways to get compensated for if we can't protect them or sign them."

"They’re coming for young Americans. Tyler Adams isn’t the end of it, Weston McKennie isn’t the end of it… 4 or 5 agents from the big clubs in England told me there will be 20 Christian Pulisic’s in Europe by the end of 2020."@TaylorTwellman DROPPING BOMBS. pic.twitter.com/Rv64F1r6Bw

As a new league, MLS has always struggled developing and keeping stars. And as a soccer league, it differs from other American sports leagues that keep the stars they've produced for their entire careers.

"We need to become more of a selling league," Garber added. "Some of you I have long, close relationships with. As a person who has been selling this league for nearly 20 years, I've always believed that you needed to have the players that resonated in your market to be those that could be aspirations for young kids who are peeking through the fence when they see them train. We all need to get used to the fact that in the world of global soccer, players get sold. I reviewed a whole list of them over the last couple of days. Those countries, they don't need to worry about building a league, the league is already built."

Garber says it's a careful balance.

"How do you retain your stars, create consistency, which is consistent with the major leagues here in our country, even though they get traded to different cities, but still on their broadcast partners and a part of the narrative, where we have a different dynamic?" he said. "We're part of the global game, part of the beautiful game. We have been buying for so long, and as we've gone through the analysis, it's hard to justify that investment and the investment that we have to make in player development. We've got to have something that turns this model around or else it's going to be unsustainable."