Goalkeepers are different -- but they shouldn't be

“They’re a lot more robust. They’re stronger physically, tactically. They are a better side.” That was the gracious assessment of Bournemouth coach Eddie Howe  following his team's 4-0 home defeat to Liverpool on Saturday, conceding that he could have no complaints about the result that took his opponent to the top of the Premier League.

Howe was correct on all counts. Liverpool was the superior team and deserved their victory. They were also, as he points out, physically stronger. On this score, however, he really ought to have been more aggrieved. Just as his Liverpool counterpart, Jürgen Klopp  -- a man who seems to provide quotes every hour, on the hour -- had been earlier last week when bemoaning Burnley's equally "robust" approach.

I'm talking in particular about one outrageous challenge on Bournemouth striker Joshua King that should have resulted in a red card and a penalty, but which went unpunished by referee Lee Mason. The Bournemouth players did not complain. The crowd barely seemed to notice, besides some low-key booing. The incident was not even mentioned in most game reports (with the honorable exception of Irish broadcaster RTE, who described it as a "heavy clattering"). And why? Because the offense was committed by a goalkeeper, Alisson Becker.

It happened in the 44th minute. A botched clearance by Liverpool's James Milner looped back into his own penalty area. King made to challenge for the ball but Becker came charging out and, as he jumped to head the ball clear (presumably worried that he might be outside the area), his raised right knee hit King square in the chest, laying him low. After treatment the striker was fortunately able to continue, and play re-started with a drop-ball. 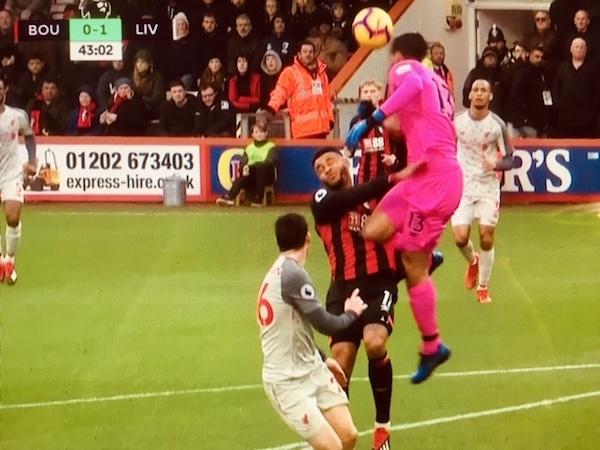 My colleague Paul Gardner has written extensively about the special dispensation that goalkeepers receive from referees, citing numerous examples. This liberal interpretation of the rules for keepers only extends to the fans, the media, coaches and fellow players too, as it seems to be universally accepted that they can seriously endanger the health of those around them with impunity. It's not enough to already have the advantage of handling the ball in the penalty area -- they can flatten opponents at the same time.

Yet imagine this same challenge committed by an outfield player. If a referee let such a blatant physical attack pass without sanction, they would be vilified across the wholly furious worldwide web. The incident would be replayed millions of times, and next weekend they'd find themselves officiating in the U-9s rec league.

I happened to be watching the game with my dad, who's generally a level-headed observer of the game. Let's unscientifically take him as an example of your average spectator. His first reaction was to mock King's manhood for not getting straight up after the challenge. When we watched the replays, his mockery turned on me for judging that Becker should have been ordered off and Bournemouth awarded a penalty. "He was just going for the ball," he said. "He's every right to do that." You could say that we then had a bit of a row.

Of course Becker was going for the ball. It's what soccer players do. Using that to justify foul play, though, is like saying that a car driver in a hurry to reach their destination is fully justified in running over several pedestrians who happen to get in their way (especially if the driver happens to be a goalkeeper). "I was only trying to reach the liquor store before it closed, Your Honor. It was just a series of unfortunate collisions!"

A couple of hours later, my dad and I (now on speaking terms again) went to watch a game at England's seventh level between Lincoln United and Tadcaster Albion in the East Division of the Northern Premier League. Early in the second half, with the score at 0-0, United's keeper Michael Emery rushed off his line for a through-ball and, with raised leg, caught Tadcaster's forward Joe Lumsden in the head just outside the penalty area.

Full marks to referee Jamie O'Connor for showing him the red card and awarding a free kick. He should replace Lee Mason in the Premier League for the rest of the season. Would he have been so strict if Emery had also played the ball as well as the man? It shouldn't, of course, make any difference. Playing the man is an offense, regardless of whether or not the ball is played too.

Lumsden was also able to continue after treatment, and Tadcaster went on to exploit its one-man advantage and win the game 2-0. In the immediate term, by far the most important aspect of both incidents is that no one was badly hurt.

In the longer run, as long as goalkeepers continue to be mysteriously blessed with extraordinary and unwarranted leniency, more players will be seriously injured or, God forbid, suffer a fate even worse. Only then might FIFA be forced to issue referees with a new guideline that should already be clear -- goalkeepers are exceptional in many ways, but when it comes to foul play they are subject to the game's rules like every one of their outfield colleagues.

referees
3 comments about "Goalkeepers are different -- but they shouldn't be".
Read more comments >
Next story loading