Tipping point: Josh Sargent and the flight of American teens to Germany

At just about the moment on Friday that MLS commissioner Don Garber was expressing his concerns about the flight of Americans to chase their European dreams -- he preferred to see it as European clubs chasing after Americans -- 18-year-old Josh Sargent was making his Bundesliga debut for Werder Bremen -- and scoring on his first touch of the ball.

After the 3-1 over Fortuna Duesseldorf, Sargent  downplayed what he had done, crediting the goal -- a header into an empty net from one yard out -- to "beginner's luck." But it was hardly the first time Sargent scored in his debut.

This week, Werder Bremen coach Florian Kohfeldt tried to temper expectations about Sargent, saying if he plays five or six Bundesliga games this season, it will be a good year for him. The plan is to bring Sargent along so he's regular in the first-team rotation next season in place of veteran Peruvian Claudio Pizarro.

For an American, Sargent is a special talent -- a forward with an unusual ability to find pockets of space for himself in the penalty area and attack the goal from different angles --  but what Kohfeldt likes about Sargent is he is not too full of himself.

"Josh does not care whether he plays at the Weserstadion or Platz 11 [the U-23s' home field]," said the Bremen coach. "and he would not care about 80,000 in Dortmund. He can block that out, a quality Pizarro also has. That can make the difference between a good and an outstanding player."

Sargent, a member of the last U.S. U-17 residency class in Bradenton, is not a product of an MLS academy, but he and other young Americans turning pro are the first generation of players who have grown up from a young age on a fast track to a pro career and been prepared for the challenges they will face.

That is a credit to the general American youth soccer environment but also to MLS academies that have been at the forefront of preparing young players for pro careers. If anything, they are the victims of their own success.

The difference from even as recently as five years ago is night and day. Of the players on Tab Ramos' first U-20 World Cup team in 2013, more players are out of soccer altogether than playing regularly for a pro first team. His current team just won the Concacaf U-20  championship in spectacular fashion, but that team is remarkable for the players he didn't have available, including Sargent.

Garber is right that European clubs are coming after young MLS academy players. Tyler Adams, who has been on a path to the pros since he was 15 and is another of the U-20-eligible players playing on the senior national team, is the exception. After only two seasons with the Red Bulls, he's been transferred to RB Leipzig.

But for every Tyler Adams, there are many more Josh Sargents lured to Germany in the hope of achieving the European dream without ever playing in MLS. Christian Pulisic's success at Borussia Dortmund has had a lot to do with that. 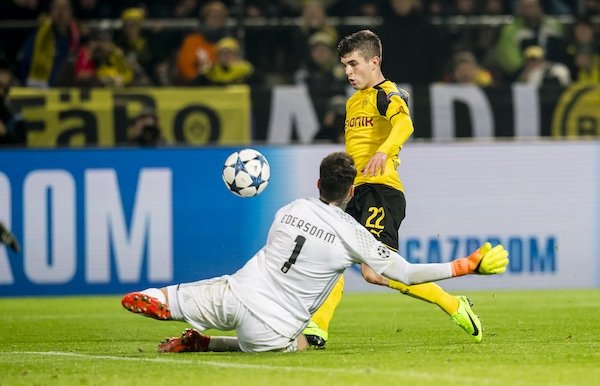 For decades, young Americans have flocked to Germany to pursue soccer careers. Most have ended up at amateur clubs. Decades ago, Soccer America would tout the latest arrivals in the Verbandsliga. The signings sounded exciting until you realized the Verbandsliga was the sixth-tier of German soccer.

What has changed and picked up speed is the flight of American teens to German pro clubs -- the Pulisic effect, if you will. There are already this year and next almost as many signings with Bundesliga clubs as in the previous decade combined.