Book Review: 'The Quiet Fan' is a lively, entertaining and realistic trip through soccer fandom

"This idea that fans care about nothing in the whole world besides their team is not the way I experience soccer, and I think that applies to millions of other fans -- it's a fake concept that's come with the hype and mendacious marketing of the Premier League age."
-- Ian Plenderleith. 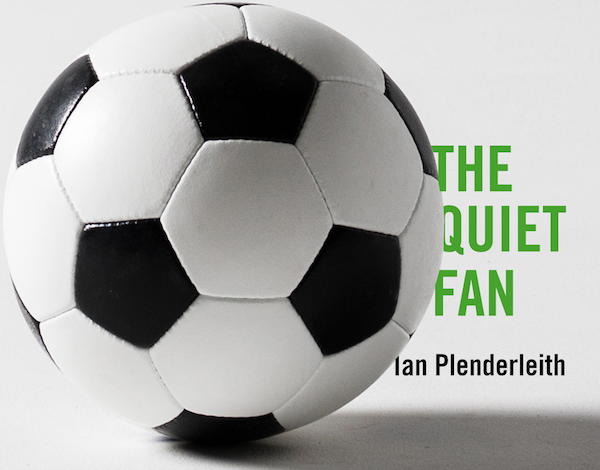 Ian Plenderleith’s “The Quiet Fan” is an ode to the fans whose hearts always have room for their teams but do not match the popular image in which they’ve been portrayed.

"Football fans may be more interested in the fate of their teams than is perhaps healthy, and they may spend too much time and money on their interest (but then what’s a hobby for?). Some of them may, for a short while, take defeat far more seriously than is rational. These are all parts of being a normal football fan. ... For the most part we are not, as commonly portrayed, obsessives."

Laced throughout are sometimes delightful, sometimes sad stories from his life in and around soccer. What is most enjoyable is how much Plenderleith speaks to you, the reader. His voice isn’t condescending, he’s not afraid to break the fourth wall, often cracking jokes at his own expense, giving his audience the life lessons soccer may teach.

Reminiscent of Nick Hornby’s 1998 “Fever Pitch” –– a book he references –– Plenderleith attaches a distinct human experience to specific games of his beloved teams: first Lincoln City FC, the team of his childhood, which spent much of the 1970s bouncing around the third and fourth divisions.

He describes himself as a shy boy when he first started attending soccer games. “They called me ‘taciturn,’ which was a word I didn’t understand.” But that changed in the soccer stadium.

At age 7, he yelled: “Come on Lincoln, you useless twats!” during a Lincoln match against Exeter City.

“These words caused a shocked quiet to spread across the main St. Andrews Stand at Sincil Bank in January 1973 for the home tie with Exeter. Not because Lincoln fans were prudish about bad language back then, but because the words came from a mouthy seven-year-old boy. I had not yet become the quiet fan. …

“I can also recall that as the words came out of my tender, unsoaped gob, my dad sort of jerked, which made me sit back down and think that something wasn’t quite right. Years later, he told me that he was trying to stop himself from laughing. I can also recall that an uncanny silence settled upon the fans around us. Either they were disgusted at my dad’s moral laxity and were perhaps waiting for him to wallop me one, or they were laughing up their sleeves as well.”

In “Love and Birmingham,” Plenderleith returns to Hornby’s Fever Pitch. Though Hornby starts the memoir off by saying that he falls in love with football like he falls in love with women, Plenderleith disagrees: “Human beings who do not give or receive enough love will be unhappy and will suffer. Human beings who do not get enough football will not, really.” Such is Plenderleath’s writing style: poignant humor combined with a realist’s conviction. He imagines what it would be like if a fan's relationship with a club was indeed like with another human:

I’ve been thinking for a while now that things aren’t right between us. Every week I show up at the appointed place and time, just like you tell me to. You always turn up, but you’re not always there -- lately you’ve seemed kind of absent. I keep to my side of the deal, doing what you asked by putting in time, money and rousing terrace chants for 90 minutes, but there’s no response. Last Saturday, for example, you lost 0–3 to Braintree, and then left the pitch without even waving goodbye.

Even a goalless away draw would, at this stage, offer me some hope that things are maybe working, that we have a future. And though my friends are calling me a fool for continuing to believe in you ...

Studying abroad brought him to Arminia Bielefeld of the German second division. He followed D.C. United when he moved to the USA's capital. His Scottish roots link him to that national team. A Celtic-Aberdeen clash in the 1984 Scottish Cup final is couple with "Despair." Birmingham City-Crystal Palace in 1987 is linked with love.

Plenderleith, who now lives in Frankfurt and writes a column for Soccer America, is also a player, referee and coach. His previous books include Rock 'n' Roll Soccer: The Short Life and Fast Times of the North American Soccer League and For Whom the Ball Rolls. In Germany, he played in a league with with no nets, no sidelines, and most importantly, no referees. "With no referees around, it’s remarkable what you can find out about yourself and the world around you. ...

“I think it would be a fantastic psychological experiment to stage an important professional match without referees. Would it end up in a 22-man brawl, or would the players, like the kickers of the Wilde Liga, learn to adapt to their new circumstances and reach sensible consensus decisions in a split second?”

"The Quiet Fan" meanders across deep, human emotions in all of its chapters for people in different stages of life. Plenderleith doesn’t pretend to have the answers; he offers his own experiences and lets the reader make of them what they will

He intersperses nuggets of knowledge throughout the humorous passages of the book, rooting it in all of the places, people, food, pints and languages he's experienced as a fan of the global game.