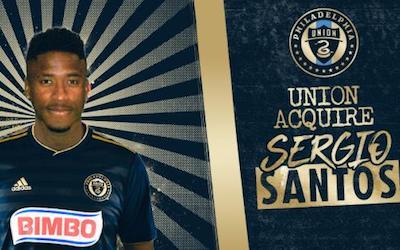 Brazilians are everywhere in the world of soccer. MLS not so much.

Argentines and Colombians have played big roles on MLS teams. In the early years, Bolivians were big. More recently, Paraguayans and Venezuelans have done very well.

But Brazilians? No Brazilian ranks among MLS's top 50 all-time scorers, and only one Brazilian (D.C. United's Luciano Emilio in 2007) has ever been named to the MLS Best XI in the league's 23 years. Just six Brazilians were on MLS rosters after teams made their post-season cuts.

The Union has struggled to get steady production out of its center forwards. CJ Sapong scored 16 goals in 2017, but his production dropped to four goals in 2018. He was later moved to the wing and Jamaican Cory Burke, a product of the Union's USL team, Bethlehem, finished the season as the starting center forward and scored 10 goals, tied for the team lead with Fafa Picault.

Santos moved to Audax Italiano from Brazil as a youth player. In his fifth season, he led Audax with nine goals in 16 league games. He also scored five goals in eight Chilean cup games and one goal in his only appearance in the Copa Sudamericana in 2018.

“He’s an upcoming striker,” said Tanner in a conference call on Friday. “And he had a fantastic season over in Chile so fortunately, we had a lot of games to watch of him and follow him via video. Finally, we traveled down twice and had to watch him live and had the meetings; I was once there as well.  I think he’s the perfect fit for our future playing style and can cover quite a lot of positions in attack. He can play almost everything there.”

Tanner added the fact that Santos is left-footed -- something the Union doesn't have -- made him especially attractive.

“All together, these items make him an almost perfect fit for our future squad," he said.  “He’s different from all our strikers we have. Not only the fact that he is left-footed — that makes a difference — but the way he is playing which you should have seen from the clips we offered to you on the website and that shows a lot. I think he really is the one that we were looking for and that’s why we were trying hard to get him.”