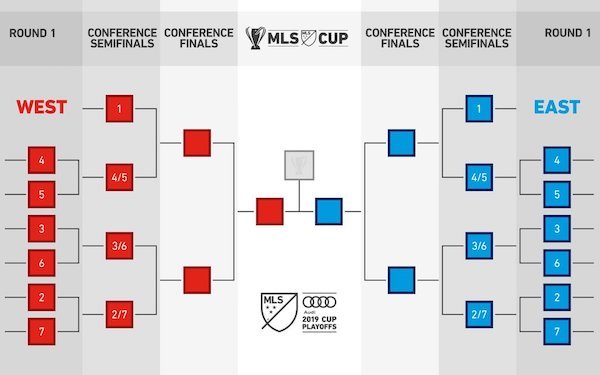 In the most sweeping changes to its playoff system since after the 2002 season when it abandoned a best-of-three series with a point system that extended series as long as three games, MLS will end its regular season three weeks earlier and shorten its playoffs to four weeks, beginning in 2019.

Among the key elements of the new MLS playoffs ...

-- A single-elimination format throughout the postseason (no more two-leg series);
-- An expansion of the field from the top six to top seven teams in each conference;
-- Only the top seeds in each conference will get a first-round bye; and
-- A four-week postseason between the October and November FIFA windows.

Positives. The major impetus for the change in formats is the excessive length of the current postseason, which extended over more than five weeks and overlapped with the November FIFA window. In 2018, the first 12 games were played over 12 days; the last five games took 27 days to finish.

MLS is also touting the new format as boosting the value of success in the regular season. Higher seeds will have home-field advantage throughout the playoffs. The new schedule will also increase the chances of the playoffs finishing in better weather.

In a two-leg format, the first legs generally were low-scoring affairs. In 2018, the six first legs produced only 10 goals, while the six second legs featured 24 goals -- a difference of 1.7 goals per game vs. 4.0 goals per game.

The October FIFA break will give teams two weeks between the final regular-season game and the first round of the conference playoffs to recover and prepare for the postseason.

The one exception to that will be in 2022 when FIFA will hold the World Cup in the late fall. The new schedule sets up MLS to finish before Qatar 2022 is scheduled to kick off on Nov. 21, but there will be no October FIFA window. The only fall window will take place Sept. 19-27.

Negatives. The regular season in 2019 will be shortened by three weeks. Each team will have to shift two games (more if they played in the October FIFA window) to midweek dates earlier in the season.

MLS will likely start the regular season earlier, beginning in 2020. It will have to consider some sort of postseason competition for the fall or a fall competition for young players, like MLB teams do in the Arizona fall league.

Returning after the October FIFA break won't be without its perils. Players won't return from international duty until the Wednesday or Thursday before the weekend openers. The first-round bye will force the conference top seeds to go three weeks between matches.