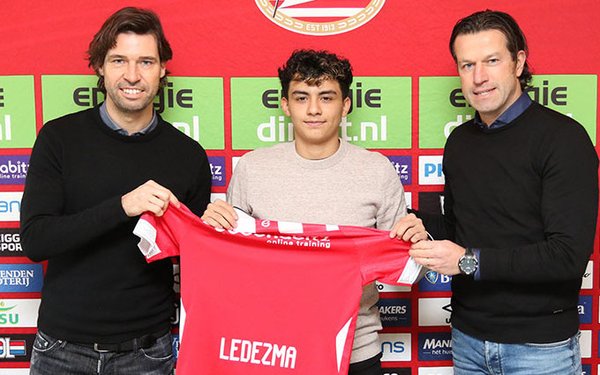 Richie Ledezma, considered the most talented unsigned player in the 2000 age group in the MLS academy system, signed a contract with Dutch champion PSV that will keep him at the club through June 2020.


“Hard work and support from my teammates have brought me to where I am,” he said in a statement. “I was surprised when I heard that PSV showed an interest in me, but I am really looking forward to playing games in the red-and-white shirt. I’ve been made to feel welcome here. PSV is a big club, and I like the town of Eindhoven. I can’t wait to come to Holland at the start of next year.”

Ledezma turned 18 on Sept. 6, but FIFA rules prevented him from registering with PSV until January. Eredivisie rules require that non-EU players earn at least 150 percent of the average salary in the league and players 18 or 19, like Ledezma, earn at least half that amount.

That means Ledezma signed for at least 211,000 euros ($240,000) a year, more than any MLS player has earned in his first season with a Homegrown Player contract and more than most 18-year-old Americans earn in their first season in Europe.

Ledezma is expected to start out with PSV O19, its under-19 team coached by former Dutch star Mark van Bommel. PSV's first team is first in the Eredivisie, while Jong PSV, its second team, is sixth in the second-tier Eereste Divisie.

He is the third player from the West Conference's 2018 Best XI to sign this year with a European team after RSL academy teammate Sebastian Soto (Hannover 96) and the LA Galaxy's Alex Mendez (Freiburg).

Unlike Mendez, the player of the tournament, and Soto, Ledezma did not play for the USA at the recent Concacaf U-20 Championship because he was injured.
americans abroad, mls, youth
1 comment about "U.S. youth star Richie Ledezma signs with Dutch champion PSV".
Next story loading