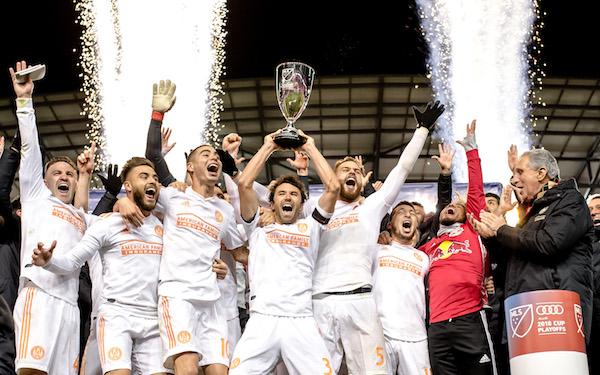 , who captained Atlanta United to an MLS title in its second season, will be returning to the Five Stripes in 2019.

The 34-year-old Parkhurst, who won his first league championship in his fifth trip to MLS Cup, signed a new contract after becoming an MLS free agent following the 2018 season.

“Michael has played an important role for our team over the past two seasons and we’re pleased to have re-signed him,” said Atlanta United technical director Carlos Bocanegra. “Since joining the club, he has served as an excellent captain and his experience and leadership is invaluable for our group.”

Parkhurst finished third in the voting for the 2018 MLS Defender of the Year and anchored the Atlanta defense that only allowed two goals in five games in the playoffs. He made a key play in MLS Cup, stripping the ball away from Portland Jeremy Ebobisse to set up the first Atlanta goal in its 2-0 win.

Parkhurst has played nine seasons in MLS and five in Europe (four with Nordsjælland in Denmark and one with Augsburg in Germany).

With Parkhurst's return, Atlanta United will have everyone back on its backline except left back Greg Garza, who was traded to FC Cincinnati.
mls
1 comment about "Atlanta United re-signs captain Michael Parkhurst".
Next story loading