"Where there is balance, there is a sense of total well-being."
-- Dr. Kenneth Cooper

A powerful and timeless sentiment expressed by Dr. Cooper over 50 years ago has multiple applications because it captures the elemental essence, importance, and influence “balance” has in our professional and personal lives. Whether the subject matter is health, professional development, education, or sport; achieving balance is indeed the key to total well-being.

In that sense, the advancement of soccer in the U.S. requires a balanced, rather than radical, approach. While there is evidence of reducing numbers of youth participants in the sport and a paradigm shift in various attitudes in player and coaching development areas is needed, contrary to popular sentiment, soccer development in America is not experiencing a system failure. Not even close. So, as stakeholders, fans, and even casual observers debate, discuss, and develop strategies to take the American game forward, we must value the contributions of the various institutions, ways, and means represented in the American soccer story -- and not be so quick to discard them as obsolete relics of past eras; they are not.

Having been both witness and participant in the American soccer experiment for the past 50 years, the story of soccer in the USA is, unquestionably, an impressive tale by any objective measure. From urban landscapes to rural households, the game has taken hold and achieved mainstream status in our culture. This was not always the case.

Many soccer evangelists, like myself, recall a not too distant past where the general American attitude toward soccer ranged from indifference to hostility. I remember taking teammates to shopping malls for promotions in front of audiences of two; while oblivious shoppers strolled by with little interest. Or, having my sons; who were 5 and 6 at the time, juggle the ball on their head as a way to pique interest of the kids playing on the basketball courts in Washington, D.C., and Baltimore and join us on the baseball outfield for Department of Recreation clinics.

These points are raised not to reminisce but to illustrate that the game has emerged from humble beginnings and the very pathways that sustained and contributed to the growth of the game to where it is today will be as important and relevant to its future growth and development. When the story of American soccer is properly analyzed, reasonable people will see the folly of hitting the panic button every time a national team disappointments.

The prospects of our senior national teams to qualify and compete in World Cup and regional tournament competition is not a reliable or prudent variable to solely determine the state of the game. Can the chemistry, confidence, and abilities of a single team really be used as a harbinger? Had the men's team emerged victorious in Couva, Trinidad and qualified for the 2018 World Cup, would calls for radical change still emerge? Probably not. But there are other measures that are far more accurate to determine whether we are on the right track; for instance, looking at the rate of progress among the game’s practitioners, namely players and coaches.

In relation to our place on the international level there has been significant improvement and in regard to the domestic game; what is taking place is encouraging.

In my view, the most relevant measure is the amount of American soccer players plying their trade in overseas leagues. In both numbers of players and quality of clubs and leagues that have an American presence; the positive trending can not be denied, there has been significant improvement over the past 25 years. Those who perform in leagues outside the USA are presented a daily dose of competing for a spot within foreign player limitation rules, different culture, and, at times, lingering local doubts of American player competence. Through such circumstances, American player presence in European leagues continues to grow. 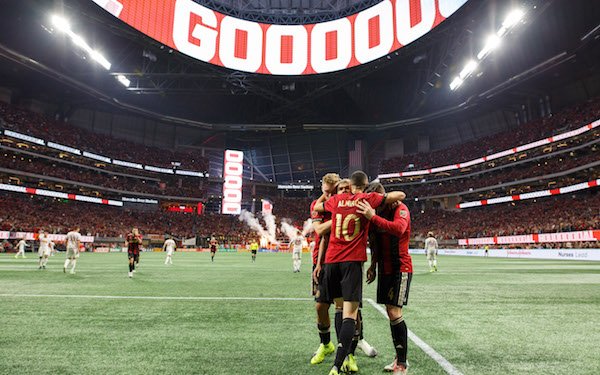 Staying with the professional game; this time domestically, a league record crowd of more 73,000 witnessed MLS Cup in Atlanta, Georgia; a region that was not a soccer hotbed a generation ago. It was a hard sell to get kids to leave the basketball black tops and join soccer clinics 50 years ago. Today, the Atlanta hip hop community is among many in the vibrant region that has embraced Atlanta United. Similar success stories are echoed in other communities that aren’t historically regarded as soccer hotbeds such as Cincinnati, Nashville, and Sacramento.

The professional game is, without question, enjoying its best form ever in the USA. Yet, some are still not convinced a world class player can ever be developed by a MLS team. In their view, America lacks the authenticity to produce world class soccer players or coaches. In my view, such sentiment will have little to no merit in the not too distant future. Recent comments from MLS Commissioner, Don Garber, suggest the league is poised to change its views on FIFA solidarity payments in recognition of economic realities and the fact the league's future value will turn on being a selling league. On a side note; hopefully, the league's support of solidarity payments will be retroactive and clubs from developing countries will receive long denied solidarity payments for players they produced that enabled MLS to develop and thrive.

Let’s take a look at the collegiate game; specifically on the women’s side. The explosion and international dominance of American women players would not have been possible without college soccer programs and Title IX. Though club structures in Germany, Japan, France, and England have emerged as rival producers of international talent, the U.S. collegiate game still serves as a vital developer of player and coaching talent. Youth girls competitions are thriving and the opportunities for young women to earn collegiate scholarships as a result of robust youth club programs have few rivals internationally.

Men's collegiate programs' impact on the professional game may have slightly diminished as a result of the growing prominence of the MLS Development Academy programs, but, like their counterpart on the women’s side it remains an important proving ground for players and coaches alike. Any doubters of what the college game can produce can look no further than the recent Akron-Stanford NCAA quarterfinal match where Akron strung together 34 passes with the reward of a goal in a quality display of possession-based soccer. NCAA rules limit coaches contact with their players, however, the support structure of college programs provide players the platform to excel and prepare for the next level of competition; if they so choose to take such a path. Contempt toward college soccer remains and some advocate it has no place in the development of future professional footballers. Yet, former Columbus Crew goalkeeper, Zack Steffen, who played two years at the University of Maryland, recently signed with Manchester City. College soccer will continue to play a role in developing top level talent.

Seek to advance the game at all levels

On the youth level, the most enduring and, at times, misrepresented topic is the debate on the “pay to play” model. Yes, barriers remain and continue to hamper player identification efforts. Quite often, those barriers are rooted in cultural as well as financial constraints. However, groups like Alianza de Futbol and Soccer In The Streets are making significant inroads in opening opportunities for all children and their families to be part of the American soccer story.

Opportunities to have access to quality instruction and competition should not be denied to any child. However, it is important to note that the international system being touted as the best replacement for "pay to play" model is under attack itself for being too commercial or awash in financial interests. I have yet to see a realistic and workable replacement to the current system and, in all candor, have heard people decry "pay to play" and in the same breath decry the "over-commercialization" and influence finance has in the sport or advocate reduction of taxes that support school programs. There are inescapable cost factors that exist in developing players. We must have consensus on how best to fairly address such costs.

Which brings me to extol the virtues of an important competitive structure that does not require player payment; our high school leagues. But, those with limited scope who unwisely advocate early “professionalization” of promising young players frequently underestimate and ignore the positive social development impact high school sports participation has on adolescents. It is difficult to accept the notion that a player will develop more while experiencing limited playing time on a Developmental Academy team rather than playing heavy minutes against older players on their high school team.

Why can't the ECNL and U.S. Development Academy programs regularly run identification camps or joint competitions along with high school programs? Aren't there opportunities for a state association ODP to link with U.S. Club Soccer?

One thing is certain, the change so many are calling for must not be in the form of a bulldozer demolishing the very programs that built the American soccer story. Instead, it must be in the form of bridges that connect and fortify these very institutions and programs that have, all too often, cast each other as rivals rather than partners over the years.

In adopting a balanced approach and one of mutual respect among stakeholders when addressing player and coaching development shortcomings, it is clear our efforts must focus on altering attitudes rather than overhauling or dismantling the very institutions and structures that got us to where we are today.

The next upward swing of American soccer will happen when existing stakeholders understand and embrace the notion that there is more than enough room to not only co-exist but cooperate and reach out beyond boardrooms for the purpose of advancing the game on all levels. This will require risk. It will contain failure from time to time. But the sports policy-makers, parents, and players must eschew easy victories in order to claim false success and short-term satisfaction. In many ways, that fateful night in Couva may be the best thing to happen to American soccer if we seek a balanced approach.

(Lincoln Phillips is a NCAA Division I Championship winning coach, former U.S. Soccer National Staff Coach and U.S. National Team Goalkeeper Coach, and former Technical Director of the Trinidad & Tobago Football Association. Lincoln is also the author of "Goalkeeping; Last Line of Defense, First Line of Attack" and "Rising Above and Beyond The Crossbar: The Life Story of Lincoln 'Tiger' Phillips." Sheldon Phillips contributed this article. He served as General Secretary of the Trinidad and Tobago Football Association, executive with World Cup '94 Washington D.C. venue, and Atlanta Committee on the Olympic Games.)