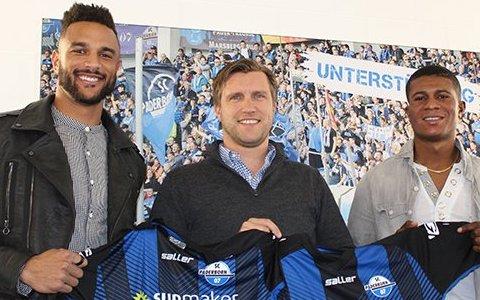 Khiry Shelton, who spent four years in MLS, signed with German second division club Paderborn after playing out his contract with Sporting KC. He is joined at Paderborn by fellow forward Mohammed Kamara, who turned pro after his junior season at UCLA.


Shelton, 25, played three seasons at New York City FC before being traded to Sporting KC, where he had two goals and five assists in 20 appearances — and 15 starts — in 2018. He was the No. 2 overall in the 2015 SuperDraft out of Oregon State

Sporting KC made a bona fide offer to Shelton, so it retains his MLS rights, but he was clear about about his desire to pursue opportunities in Europe. Sporting KC

Kamara scored 22 goals and 48 goals (a school record) in leading Tyler Junior College to  back-to-back NJCAA Division I championships, then scored five goals in 14 games for UCLA in 2018.