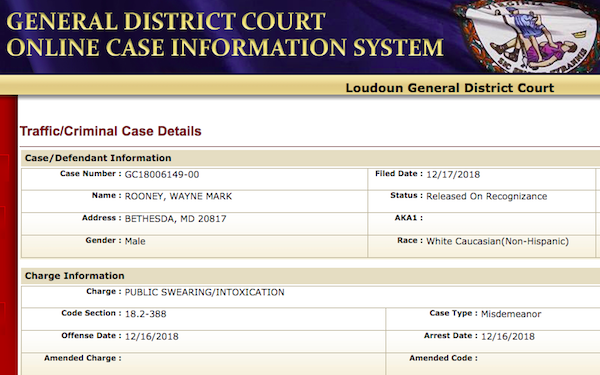 Wayne Rooney's pre-Christmas season included a visit to the White House with his wife and four children for a kids party -- he was photographed with Barron Trump, a member of Arlington Soccer Association U-13 team in the Development Academy -- and tour of the premises.


The D.C. United star was also seen at NBA and NHL games with his sons.

But his pre-Christmas festivities were interrupted Dec. 16 when he arrested at Dulles International Airport on charges of public swearing and intoxication.

Erin Hawksworth, a sports anchor/reporter for Washington television station WJLA, first tweeted the news on Sunday along with a police mugshot of the former England star.

Rooney was returning from a trip to Saudi Arabia and triggered a door alarm at the airport. He was booked into Loudoun County Adult Detention Center, then released. He later paid a $25 fine and $91 in costs, ending the matter, but by the end of the day the story was plastered over the British tabloids.

In a statement, a Rooney spokesperson told the media: "During the flight, Wayne took a prescribed amount of sleeping tablets mixed with some alcohol consumption and consequently was disorientated on arrival. He was approached by police who arrested him on a minor misdemeanor charge. He received a statutory automatic fine and was released shortly afterwards at the airport. The matter is now at an end. Wayne would like to put on record his appreciation for the manner he was treated by all involved."

D.C. United said Rooney's arrest was a "private" matter and would be dealt with internally.
jurisprudence, mls
2 comments about "Wayne Rooney arrested after arrival at Dulles airport on public swearing and intoxication charges".
Read more comments >
Next story loading