What players are having for dinner -- I'd rather not know

As a symbol of both the decadence and the detachment of the modern soccer star, it would be hard to improve upon the $1,000-plus, gold-leafed steak that was served up to Bayern Munich's Franck Ribery  in Dubai last week. That the former French international enjoyed such a delicacy in the Nusr-Et restaurant, with the compliments of its owner Nusret Gökçe, is of course entirely his own business. At least, it was until he sent out a tweet to the whole world to let them know -- as so many of us are compelled to do nowadays -- what he was having for dinner. 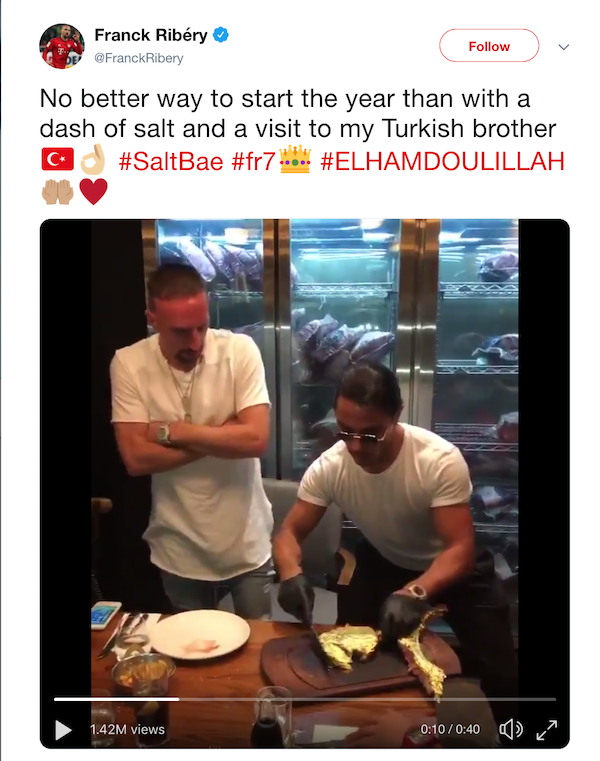 In Ribery's native France, where the player has never been popular since being part of the squad that went on strike during the 2010 World Cup, the meaty tweet provoked voluminous abuse on social media from those less fortunate, and those most righteous. Ribery lashed back in French with a series of colorful responses, the most printable being that his attackers were haters blighted with envy. There may have been something about their mothers and their grandmothers too.

Bayern responded yesterday by landing the forward with a "heavy" but unquantified fine (is there a fine heavy enough to seriously inconvenience any top-level pro?), and issuing a statement about how the club "cannot accept the words that Franck used, and which as a role model and an FC Bayern player he is not allowed to use."

This is the same FC Bayern that has just begun its annual training camp in Qatar, a country that for years has been exploiting hundreds of thousands of low-paid workers from the developing world to build its stadiums for the 2022 World Cup under horrific and deadly conditions. As ever in the morally nebulous world of commercialized sport, no one comes out of this looking good. Greedy, unscrupulous clubs hypocritically pontificate about role models. Over-tattooed, super-rich players show the world what a wonderful life they lead. Self-appointed guardians of ethical behavior channel their outrage via high-speed wires pulsating with indignity, while no doubt leading flawless lives of humility and virtue.

Meanwhile, writers and fans of a certain generation lament the lack of characters in the modern game, where players' off-field images are curated and almost choreographed by PR flunkies, agents and marketing executives. It's a rare episode when someone like Ribery slips and reveals what he really thinks. It may not be pleasant to hear his inner thoughts, but at least it offers us a glimpse of something more genuine than another trip to the kids' hospital ward.

It's the flip-side to what teams like the New York Cosmos practiced in the 1970s. At the time, the Warner Brothers-owned club encouraged its most prominent players to go out on the town and be seen, and to be seen behaving badly -- preferably in the company of pop stars and eye-catching escorts while stumbling in and out of limousines. Yet in its naked yearning for publicity, this approach was just as cynical and artificial as the latter-day orchestration of whole teams coached to say nothing at great length.

Ribery complained in his tweets that the press was never there to cover his charity events, as though that was the whole purpose of his generosity. Someone should tell him that it's just not news when a massively compensated sports star does work for a good cause, and that's the way it should be. And if players don't broadcast snapshots showing fans that their prime cut of beef comes wrapped in precious metal, that won't be news either.

There are of course modest players who quietly go about their lives and their charity work without any fanfare. The irony is that we never hear about them. "That world for me is fake," says Brighton & Hove Albion's midfielder Pascal Gross, explaining his absence from social media in the latest issue of the German soccer monthly 11 Freunde. "I'm a soccer player. It shouldn't be about how many pictures I upload. People should judge me on how I play."

Let's judge Ribery on that basis: he is a magnificent soccer player, still near the top of his game at 35. Just before Christmas he was the architect of Bayern's two victories over Leipzig and Frankfurt. While it's difficult for non-Bayern fans to admire someone who is prone to falling over in the penalty area and swinging an elbow into an opponent's face, let's be generous and acknowledge such antics as an integral part of the game's rich fabric. He's a character.

Still, we do not want or need to know what he had for dinner, whether it's a golden steak or a slice of cold spam with fries and ketchup. Don't tweet it, eat it. If we want to see the best parts of your life, we'll watch the highlights reel.