Tim Weah has joined Scottish champion Celtic in Dubai, where it has camped out for the winter before its season resumes Jan. 19 with a Scottish FA Cup match against Airdrieonians.

The 18-year-old American joined Celtic on a six-month loan from Paris St. Germain after signing a contract extension through 2020-21 with the French champion.

Weah knew about the Glaswegian club from his father, the legendary George Weah, who played against Celtic, and both parents, George and Clar, have followed the career of Celtic manager Brendan Rodgers.

Speaking to Celtic TV in Dubai, Tim Weah said he trusts what Rodgers has in store for him.

“We had a simple meeting when I came down to visit the stadium and the training ground," he said. "The coach told me he just wants to see me playing my game, help the team by making runs into spaces and stretch the game. He’s looking to play me as a nine and I can’t wait. I’m so excited to be here. I feel like the coach has a great plan for me and I think he’ll help me develop as a man.

Weah also knows about Celtic from Frenchman Odsonne Edouard, who had also been in the PSG academy before being transferred to Celtic.

“It’s funny," he said, "as the day I had the visit, Odsonne dm'ed me on Instagram and said, ‘Hey bro, are you coming?’ I was like, ‘Yeah, I had a meeting with the manager and I’m really loving the team, I’m really loving the club so I’m going to come.' He saw me today in the locker room and he was laughing and joking. We were catching up. It’s great to see him again and how he has progressed and seeing his development at this club. Hopefully, I can do the same here at Celtic.” 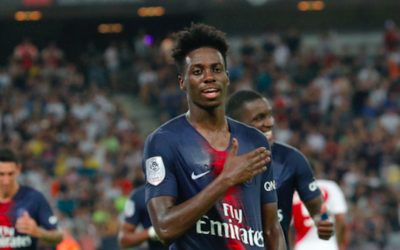 Weah, who scored in the Trophée des Champions and one of two Ligue 1 matches for PSG in August, isn't put off by the talk of his father.

"There's no pressure at all -- I thrive on it all," he said. "I just go with the flow. Of course, people are going to compare me to my father and there's no problem with that. At the end of the day, I'm going to have to live with that for the rest of my life, whether I like it or not. But I love it. It pushes me to be a better me, a better athlete, a better player. It's just motivation and I use it to my advantage."