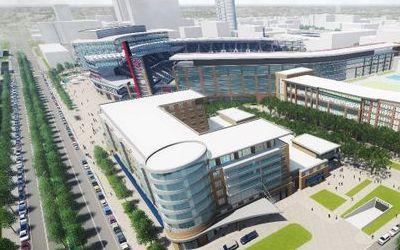 Indy Eleven, which began in the NASL and now plays in the USL, did not get anywhere with its bid to join MLS because it was unable to get on the radar of the Indiana state legislature for support for a soccer stadium.

But Indy Eleven, which now play Lucas Oil Stadium, home of the NFL Colts, is pitching a new project, introducing plans for "Eleven Park," a mixed-use development with a 20,000-seat stadium it hopes to have ready for 2022.

“This is more than a stadium,” Ersal Ozdemir, CEO of Keystone Group and owner of Indy Eleven, said in a statement. “It is the opportunity to create a vibrant community that will attract individuals and families from near and far to live, work and play. We believe that the Eleven Park development will improve quality of place in Indianapolis by creating an entirely new neighborhood that will help attract and retain quality workers and families."

The price tag for the project (construction plus infrastructure): $400 million privately financed and $150 million in a public-private partnership.