Rising star Nick Taitague on his Bundesliga quest and the joys of rejoining the U.S. U-20s

There is little doubt that United States U-20 head coach Tab Ramos has highly rated Nick Taitague  for quite some time. Unfortunately for Ramos, he has been unable to get the Virginia product involved with his teams for several years. This January, however, could mark the start of a positive trend for Taitague and his involvement with U.S. Soccer. 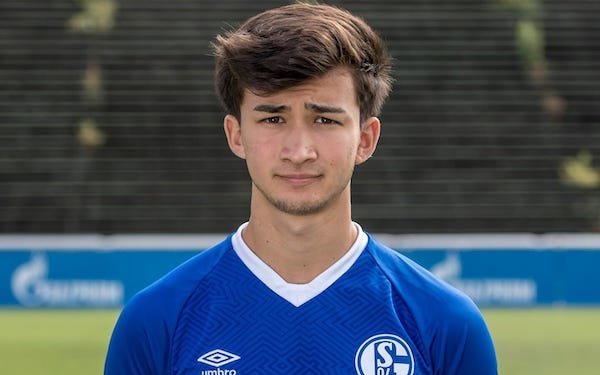 It all started in 2017 when Ramos sought to include Taitague for both the Concacaf Championships and the U-20 World Cup but was denied a release from his German club, Schalke 04. Since then, however, Taitague has suffered a wave of serious injuries that limited his playing time.

It was only recently when he was cleared to return to the field and Schalke agreed to release him for the current U.S. U-20 camp in Florida. In team’s first friendly of camp -– against the U.S. U-19 team –- Taitague was brilliant where he scored a goal on an assist from Ayo Akinola and drew a penalty, which he failed to convert. But on all reports, Taitague was the man of the match.

“I think the guys here are in really good form and the chemistry is good coming off the Concacaf Championship,” Taitague said. “They were solid obviously and I am excited to work with them. I am coming off about a year and a half away from the national team. It's great to be back and getting integrated with the team. I felt good on Tuesday. Most of the guys from the starting lineup yesterday I already know and have played with before. I like how they play and Tab is a guy who I've played under before.”

With Taitague’s return to the field, Ramos might have found a key piece of the puzzle that can help the team make a deep run at the U-20 World Cup this May in Poland and move beyond the quarterfinals –- the round where the last two U.S. U-20 teams were eliminated.

Things are starting to trend upward for Taitague. While many players have to deal with injuries and making comebacks, Taitague faced extreme challenges on his way back to the field and the effects of some of injuries continue to linger.

“It was mentally very challenging this past year just coming back,” Taitague said. “It started in 2017 with my back injury I think that led to a couple of more injuries this past year. I tore my hamstring as well and I had an issue with plantar fasciitis as well. Mentally, it is very challenging but at the same time, I know what I want to do professionally and that is soccer. I am fully committed to dealing with whatever injuries are thrown my way. So far on the way back, I feel good. I am starting to focus on being healthy for one month or then three months."

Taitague signed with Schalke upon turning 18 in February 2017 and, with American teammates Haji Wright and Weston McKennie, helped Schalke reach the semifinals of the U-19 Bundesliga. He played 20 games for the U-19s in 2017-18 and looked to be headed for the first team when the injuries hit.

“The first team at Schalke is always on my mind, that's the reason why I am in Germany -- to play at the highest level and to reach my potential," he said. "But I have taken a step back with my fitness and my well-being. It's very challenging for me every day to keep up with my daily exercises … but lately it's been my No. 1 priority to reach the new height I want to be at.”

The fact that Taitague is still not yet at full fitness makes it even more encouraging for Ramos and U.S. Soccer given that he has looked very sharp at camp and will only likely improve if he continues to stay injury free.

Following Tuesday’s friendlies, his teammates were quick to point out his potential impact and how easy he is to play with.

“He's really good with the ball,” said forward Jesus Ferreira. “If I get the ball, I can always find him wide and he'll make sure he gets to the end line to get a cross off. So, I don't have any doubts with him. When I get him the ball, I know he's going to do his job. I just have to get in the box and finish.”

What also helps Taitauge with both the current U.S. U-20 team and with Schalke is his versatility. When he moved to Germany, he was a pure No. 10 but Schalke moved him to the wing positions. In Germany, he noticed that the wingers like to frequently cut into the field. But with many other teams, including the U.S. U-20 team under Ramos, the wingers like to stay out wide.

The ability to play out wide is an opportunity that Taitague believes best suits him well but with the U.S team pretty deep on wingers (including Jonathan Amon, Paxton Pomykal and possibly Tim Weah), Taitague might also see time at the No. 10 for Ramos. Either way, he is eager to take part to create goals.

“I play left wing but I started out as a 10,” Taitague said. “[Tab] said he might still be willing to play me there because I can play either. But right now, I think my greatest strength for this team is when I get isolated out wide and going 1v1. I love the position in how [Tab] plays me all the way to the line and how I play out wide. It's a big switch from Germany -- where the wingers are always inside and getting the ball, almost as a striker. It's good to be back and just able to and pick the ball up out wide and just go at players.”

But no matter which position he plays, Taitague is hoping that fate allows him to finally participate in a major tournament like the U-20 World Cup. He has been through a lot behind the scenes to get back onto the field but now he is hoping that 2019 puts him into a situation where he can step into the spotlight – not only in the Bundesliga for his club but also for his country this summer at the U-20 World Cup in Poland.

“Just to be a part of the team on a big stage, playing nations for something -- it's something I have never done before,” Taitague said. “It's a big challenge, a big opportunity, and a big platform for players to showcase their talent. It is very important because I also missed out on the U-17 World Cup. I have never participated at a big event for the national team. Right now, the U-20's are very important to me.”

(Brian Sciaretta is a veteran journalist of all-things American soccer and is a senior editor for American Soccer Now.)

u.s. under-20 men's national team, under-20 world cup, youth
4 comments about "Rising star Nick Taitague on his Bundesliga quest and the joys of rejoining the U.S. U-20s".
Read more comments >
Next story loading