Bob Bradley, on the quest for playing good football

Bob Bradley begins his second season back in MLS with LAFC after six years coaching in Egypt and Europe. His work in MLS goes back to its launch as an assistant at D.C. United on its championship teams in 1996 and 1997. He took the Chicago Fire to the MLS Cup 1998 title in his first season as an MLS head coach and later coached at the MetroStars and Chivas USA before becoming the U.S. national team head coach in 2007. 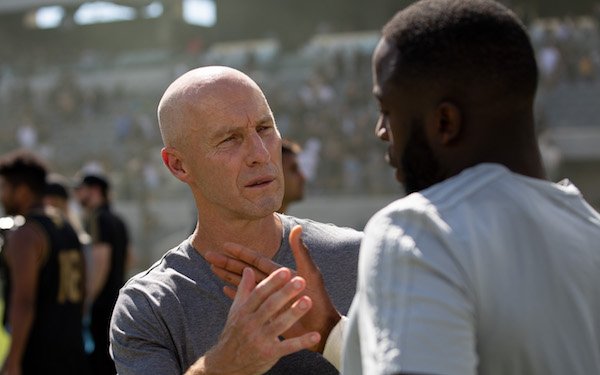 He believes passionately about his work as a soccer coach but also has little use for the critics of his work. After the SuperDraft, he talked about how he sees the game.

"The idea is we're going to challenge you and make you a better player," he said of working with players on LAFC. "That's kind of how I have tried to do it over all the years. My experience is that players still appreciate being coached. They show up every day to training camp with ideas. They are going to tested and have to think and made decisions and make good plays. It's what we do."

LAFC set an MLS record for the most points by an expansion team in its first season and was second in the league in goals with 68, averaging two goals a game.

"I thought in almost every game there was some good football," he said. "Was it as consistent as we want? Not always. In each part of the game we can do it a little better. We can see things a little faster, do better with advantages. I think the ability to control games is still a big challenge and that's an area that needs to grow. As much as we love going forward, if the moment is not right, [we need] the ability to then connect passes and be very organized so when the ball turns over the game isn't open. I think those are qualities of good teams. It's hard to find a balance in our ideas, and we certainly have a way to go."

He disagreed with the notion that LAFC, which lost young Canadian Mark-Anthony Kaye to a season-ending injury on July 26, did not play with a No. 6.

"It makes no sense to me," he said. "We played most of the year in midfield with -- I call it 1 and 2, 1 deeper and 2. In certain moments, if the ball can't go to the deep one, he moves just forward a little bit and the other one moves back. When the ball moves forward, they rearrange. That type of fluidity and that type of understanding is important. Most of the games Eduard Atuesta played, he played as a No. 6. It might not look like someone else's idea of a No. 6. I believe in guys who can serve passes and use space. I think Sergio Busquets is damn good. Xabi Alonso is damn good." 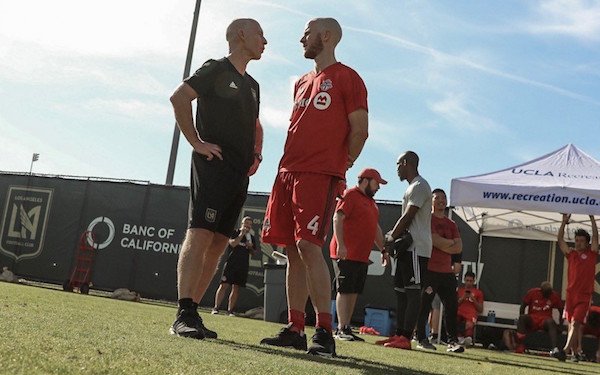 It was when a reporter brought up the "empty bucket" -- the term for how Bradley used two defensive midfielders on the national team and the reference to what was perceived to be his defensive-minded tactics as national team coach -- he took exception.

"There's a bunch of dopes that were on BigSoccer and are now on social media and they say things," he said, "and we have other dopes who can't watch a game and figure things out for themselves. And they write s*** like that. These people don't know the f*** what they are doing. This is where we are football-wise in this country."

"I get grilled about the Gold Cup," he said. "Go back and watch the final. It was a good game. What if Clint [Dempsey] scores? He hits the crossbar when the score is 3-2. We always tried growing our football. Yes, we had to work hard. Yes, when we played Spain [2-0 win in the 2009 Confederations Cup semifinals], they had a little more of the ball. But I've seen things where [possession] was 56%-44%. Who plays Spain and has 44%, especially when you have the lead? Guess what? We played football. We are always trying to develop our football. I don't know where the rest of this comes from. I don't even bother any more. I just try to enjoy what I do. I show up every day. I challenge my staff. I challenge my guys. Out of 35 games [in 2018], most games if you showed up and like to watch football, you'd say, 'Yes, I want to come back.'"

When he decided to come home, Bradley said he talked with various MLS clubs about the soccer he wanted to play and his approach to the game.

"Luckily, for me," he said "the people at LAFC said, 'That's interesting.' We've got an incredible stadium. Incredible training ground.  Great guys that I work with every day. We show up early. I challenge all of them. It's one of the best football conversations every day for three hours, then we go on the field.  I am a pain in the ass. I challenge guys about what they've been talking out. It's real. It's ideas. We share video. I talk about the guys I think are good players and best teams all the time. I show pictures of that. I show pictures of what we do." 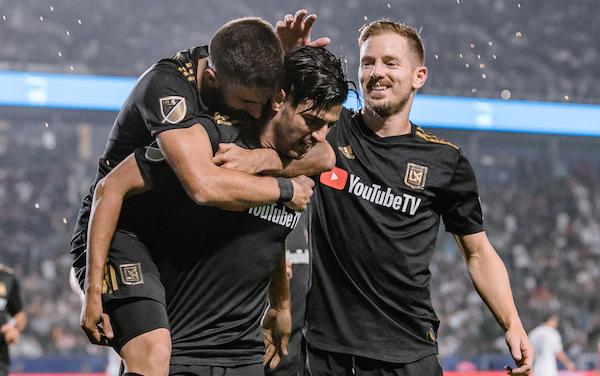 Bradley said there's room for improvement in LAFC, which finished third in the Western Conference and lost in the Knockout Round, suffering a stunning 3-2 defeat to Real Salt Lake.

"We can do it better," he said. "We scored a lot of goals but weren't complete enough. I could show you all the advantages we had. I can show you all the times the ball turned over and our reactions and the poor goals we allowed.

Bradley disagreed with the notion that LAFC didn't have much depth but admitted losing Kaye, who came from the USL, was a blow.

"We started with a roster that was somewhat thin," he said. "Then as the year went on I don't think our roster was that thin. We had some injuries. Mark-Anthony Kaye was making a lot of progress and he gave our midfield a little more balance. When he got hurt, we missed him. He was a young player getting better every day. And everybody around him could see it. We missed that."

LAFC tried to pry the No. 1 pick in the MLS SuperDraft -- Frankie Amaya from UCLA and the U.S. under-20 national team -- away from FC Cincinnati, but Bradley is high on 19-year-old Jamaican Peter-Lee Vassell, taken with the No. 40 pick.

"I think we made a strong attempt to get the first pick because I saw this guy that is good football player," he said. "If we could get our hands on him at age 18 -- I am always looking for players like that. At the end of the draft, I'm looking at my notes and saying, 'How come no one picked this kid.' [Vassell] Did they watch? He's an international and all that. He doesn't turn 20 [until March]. That kid has some easy way of doing things. Now we'll see how rest of it comes along, seeing things quickly, reacting, being aware of everything."

Amaya started on the U.S. U-20 national team that beat Mexico, 2-0, to win the 2018 Concacaf championship and is part of the 2000 birth-year group with Josh Sargent, Tim Weah, Alex Mendez and Chris Richards that is shaping up to be one of the most talented age groups the USA has ever produced. Still, Bradley said things need to get better.

"I was with the [1987 and 1988 McGuire Cup champion] Union Lancers and we were in Chicago for five years around the Sockers [where son Michael played]," he said. "Now we call it 'academy.' I think that we're making progress but we have to get better. We don't have enough places still where the game is played the right way every day, every day, every day and out of it kids are pushed along."

He said almost every one on social media talking about young players has an agenda and he forms his opinion about players and doesn't share them, refusing to go on podcasts any more. He admitted, though, he still listened to them because he likes to know what's out there.

"Every second of the dialogue from the [USA-]Trinidad game until today," he said, "I hated every second. I can't stand the arrogant Republicans and I can't stand rabble-rousing, total idiotic Democrats. There's nothing that makes any sense."