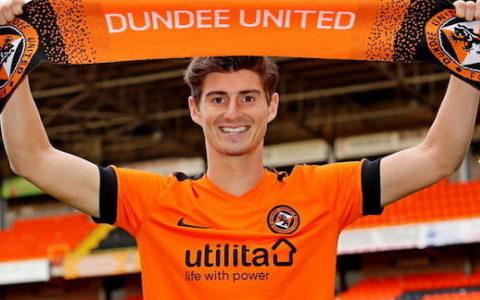 
Harkes, the son of former MLS and U.S. national team star John Harkes, played his first two MLS seasons for D.C. United after finishing up at Wake Forest. He started 22 games in 2017 but only four in 2018 for D.C. United after an influx of new signings. He attended the U.S. national team's January 2018 camp but did not play in the 0-0 tie against Bosnia-Herzegovina.

Harkes has Dundonian roots. Grandfather Jim Harkes was born near Dundee United's Tannadice Park and supported the club as a child. He played for Dundee North End juniors before moving to New Jersey in 1960. John Harkes had a trial at Celtic after the 1990 World Cup but ended up signing with Sheffield Wednesday and playing seven seasons in England with four different clubs.

"I am excited to get started here at United," said the 23-year-old Harkes, whose option with D.C. United was not picked up for the 2019 MLS season. "This is a great opportunity for me, and I want to help this team get into the Premiership. I believe my style of play will be suited to Scottish football and I want to get out on the park in a United jersey as soon as I can."

Dundee United was a European power in the 1980s, reaching the semifinals of the European Cup in 1984 and final of the UEFA Cup in 1987 (sweeping Barcelona along the way). The Terrors dropped to the second-tier Scottish Championship in 2016 and finished third the league in their next two seasons, losing the promotion playoffs.

"Ian adds quality to our midfield pool and will bring extra quality into our first-team squad," Dundee United manager Robbie Neilson, who was appointed in October. "I know we are getting a good energetic and skillful player and we will now look to get his match fitness up to speed."
americans abroad, mls, scotland
Next story loading