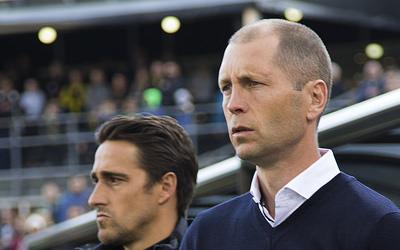 The staff includes assistant Josh Wolff, who started with Berhalter when the USA beat Mexico, 2-0, in the round of 16 at the 2002 U.S. World Cup, and played with him at 1860 Munich in Germany and later joined Berhalter as his assistant when he was hired by the Columbus Crew at its head coach and sporting director after the 2013 MLS season.

During his 15-year professional career, Wolff played for the Chicago Fire, Kansas City Wizards and D.C. United, as well as 1860 Munich. He scored nine goals in 52 games for the USA and went with Berhalter to the 2002 and 2006 World Cups. He served as an assistant at D.C. United for one season after retiring as a player.

-- B.J. Callaghan as strategy analyst and assistant coach from the Philadelphia Union, where he worked as an assistant for seven seasons;
-- Steve Tashjian as head performance expert from the Crew, where he was with Berhalter and Wolff for the last five MLS seasons after working at Everton;
-- Darcy Norman as movement and conditioning coach. Through June 2018, Norman worked for both the German men's national team and Italian club Roma as a performance data analyst and fitness rehab coach and director of performance, respectively.

"In putting together the staff, we looked for coaches with considerable backgrounds in four different areas: World Cups, Concacaf, MLS and Europe," Berhalter said. "This group checks those boxes, and we are confident their wealth of experiences will be beneficial to the players and for the development of our program."

Spaniard Nico Estevez, another member of Berhalter's coaching at Columbus, will join the national team coach as an assistant coach when his U.S. work permit is approved. The only member of Berhalter's Crew staff still in Columbus is his goalkeeper coach, Pat Onstad, who is serving as the interim general manager under the team's new regime.

"From the outset, we searched for coaches that have complimentary skill-sets and varied career paths," said men's national team general manager Earnie Stewart, who worked with Callaghan at the Union. "Starting with Gregg and with these additions to the staff, we have assembled a strong group that can now begin to implement the culture, style of play and identity we envision for the national team moving forward."