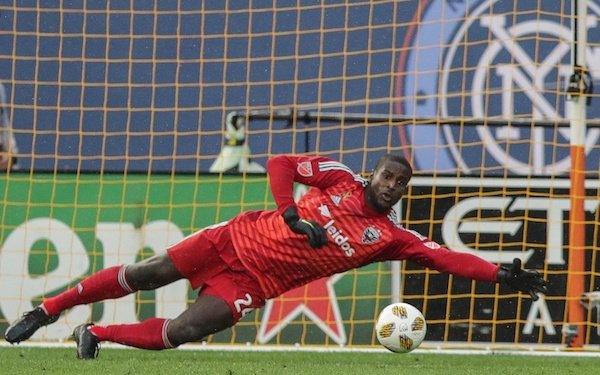 Goalkeeper Bill Hamid came back from Denmark in mid-season and helped D.C. United make the 2018 MLS playoffs with a 9-2-3 record in 14 games and a 1.00 goals-against average, the lowest in his nine seasons, even better than in 2014 when he was named the Goalkeeper of the Year.

At 28, Hamid is approaching the prime of his career, so it was a surprise that he wasn't called into the U.S. men's national team's January camp by new head coach Gregg Berhalter, who selected Alex Bono (Toronto FC), Sean Johnson (NYCFC), Tyler Miller (LAFC) and Zack Steffen (Columbus).

Hamid believes he should be in Chula Vista, where the USA in starting its third week of training.

“I believe in my ability," he said MLS's Media Day in Los Angeles. "I saw the four they called in. I’m going to just keep it real with you: I feel like I’m better than all four of them.”

Hamid says he spoke with Berhalter before camp.

“I got an understanding of why he chose those four for this camp and I understand it," he said. "My job is step on the field [March 3] against Atlanta and ball out. The information that Gregg gave me was great. Speaking to him and hearing his side of things. For me, I want to be on the national team.”

Hamid's return from FC Midtjylland of the Danish Superliga on an 18-month loan was influenced by his need to be playing again if he wanted to remain in the national team picture.

“From January 2012 when I had the first camp against Venezuela and got that shutout," he said, "it meant everything to me. And I’ve had some great coaches that believed — Jurgen [Klinsmann], at one point, believed in me, Bruce [Arena] and Dave Sarachan believed in me.”

Hamid understands an opportunity to play for the national team is not a given.

“You have to earn it," he said. "You have to earn it every week. I’m 28 now and I’ve been playing in MLS since I was 18 years old. It’s been 10 years. It’s been a great 10 years of my life. It’s a lot of growth as a goalkeeper and I’m starting to feel like it’s all coming together. So now, once the games start, I just have to keep grinding away and performing well. I know that I’m going to show this country and show the world that I’m the best goalkeeper in the United States of America, like I once did."

Berhalter is the fourth U.S. coach in the last 26 months.

"That's football," Hamid said. "It's a revolving door. I know what Gregg is about and the style of football he wants to play. I just have to impress him. I know he's watching. He says he's going to be watching me. I understand what he expects out of his goalkeepers in terms of playing out of the back, in terms of distribution, in terms of shot-stopping. I completely understand."

He spent part of the offseason seeking out advice on his game.

"I analyzed my game a lot more," Hamid said. "I went to London and spoke to some people and sat down with them and analyzed my game. I actually know some Premier League coaches that I sat down with and they analyzed parts of my game that I didn't realize were deficiencies. And I didn't really get that information from past goalkeeper coaches or the goalkeeper coach I have now. To get a different sense, a different understanding was great for me. I am 28 now and learning the craft. Fine details are the most important thing for me."

Now, it's back to work at D.C. United, which is seeking to return to MLS Cup for the first time since 2004. Hamid said the team met with the owners for dinner last week.

"They have invested in the team, in players, in the stadium," he said. "We've been told the goal."