You won't have seen the names Josh Atencio, Ben Ofeimu or Lionel Abate Etoundi in Soccer America Daily's morning "MLS Moves" wire because they didn't sign with MLS clubs, but they represent the next wave in MLS player development as they are teenagers signed this week by MLS clubs to their second teams in USL.

As MLS clubs rush to sign their top young academy players to avoid losing them without compensation when they turn 18, they are parking many of them with USL contracts on their second teams.

As of Jan. 24, MLS clubs or their USL second teams have under contract 63 players born in 2000 or later, ie. they are young enough that they still have eligibility in this season's Development Academy.

They include Jahkeele Marshall-Rutty, whom Toronto FC II signed as the age of 14 in December, and Cade Cowell, whom the San Jose Earthquakes made their youngest signing at age 15 on Wednesday.

Of the 30 players born in 2000 or later and signed to their first pro contracts for the 2019 season -- including some signed last fall after the close of the summer transfer window -- 18 were signed to contracts with second teams in the USL's two pro leagues.

Atencio (photo), a 16-year-old midfielder, is the eighth player the Seattle Sounders have signed to S2 from their U-17 team that won the 2018 DA championship. 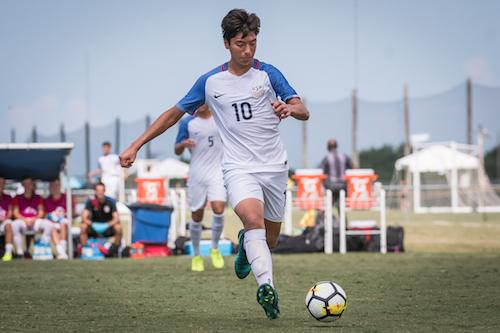 The Philadelphia Union has done a great job of promoting academy players from the Delaware Valley area of Pennsylvania, New Jersey and Delaware, but 18-year-old Ofeimu, who hails from Michigan, is the first product of its residency program to turn pro -- and he's tipped to move quickly from Bethlehem Steel to the Union first team.

Etoundi, 18, is one of many Cameroonians whom MLS teams have signed in recent years. With the advent of second teams, they can now start out on second teams like Etoundi, who plays for Cameroon's U-23s, will at the Real Monarchs.