Use lines to help you ref

In soccer, I’m increasingly refereeing with lines from diverse sports on the field as turf fields are often used for football and lacrosse. And these lines can be a help to the ref.

One such way is the football markings can be a great help in getting 10 yards for free kicks, especially if the kick is in the center of the field rather than near the touchlines. I simply say, “It’s real easy for me to indicate where the 10 yards is from the ball as we are on a football field. Come back to here, please.” 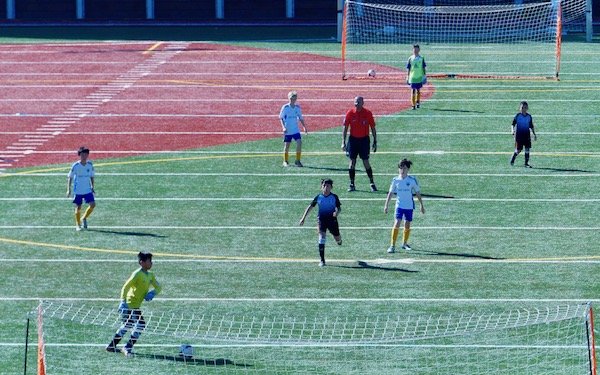 The football markings are also very good in spotting players in offside positions, particularly if the referee is doing the game solo as the ref can use these lines as a guide for positioning across the field.

Regarding futsal, although I’m refereeing more futsal games on fields used only for futsal, traditionally youth futsal has been played in gyms and roller hockey rinks with the lines of many other sports. And these lines can be invaluable in stopping encroachment on restarts.

One example is the kick-in, which is what would be a throw-in in outdoor soccer. The opponents must be five meters from the ball on kick-ins. Before the game, I look for one of the many lines on the floor that’s approximately five meters from the touchline and use that by telling the players, “Please stay behind the red line.”

Now, that line might be 4.75 meters or 5.25 meters from the touchline but that would work too as it’s very helpful for the players to have a line to go behind.

It’s vitally important to go over the lines with your partner before the game so he or she indicates the same line for distance on the other touchline.

For free kicks, find a line approximately five meters from the ball and tell the opponents to stay behind that line.

But all these lines can also be confusing and this brings me to a dilemma for the referee regarding DOGSO (Denial of an Obvious Goal Scoring Opportunity). One definition for the sending-off offense of DOGSO is denying the opposing team an obvious goal-scoring opportunity by deliberately handling the ball. The dilemma is when the goalkeeper handles the ball a yard or so outside the penalty area, marked by a yellow or red soccer line, but just inside the white football line.

Yes, I could send off the keeper for DOGSO. And some people might scream for a red card no matter how many lines are on the field and no matter the age group.

Instead, what I have done several times is award the direct kick and show the keeper a caution for unsporting behavior, giving the keeper the benefit of the doubt that the goalie did not know exactly which line to follow. I feel good about doing this and very briefly explained my reasoning.

Additionally, I would like to point out in my games that the number of times the keeper deliberately handled the ball on fields with multiple lines was far greater than on fields with just soccer lines, giving validity to my view that the keeper was probably confused by so many lines.

referees, youth
4 comments about "Use lines to help you ref".
Read more comments >
Next story loading