U.S. victory gives Gregg Berhalter something to build on 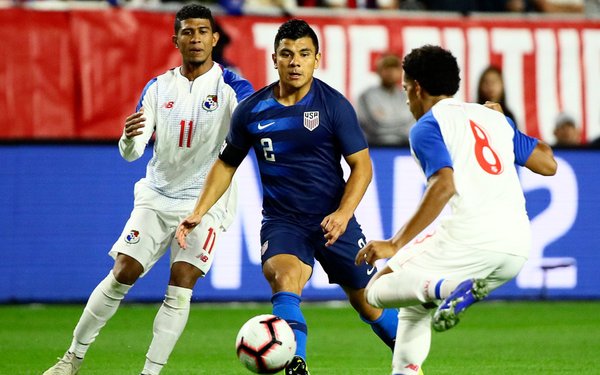 As January openers go, the USA's 3-0 win over Panama was impressive.

The Canaleros were nothing to write home about, but then January opponents usually aren't. Still, you have to go all the way back to 2004 to find an opponent that the USA beat by at least three goals in its season opener.

Gregg Berhalter joined only Bora Milutinovic (1991) and Bob Bradley (2007) as the only U.S. head coaches in the last three decades who have won in their national team debuts.

Berhalter, who took over in December after the full-time position was vacant for 14 months following his mentor Bruce Arena's resignation after the loss to Trinidad & Tobago knocked the USA out of the 2018 World Cup, faces a tall task of winning back the support and confidence of U.S. fans.

That was evidenced by the crowd of only 9,040 fans on hand at 63,400-seat State Farm Stadium on Sunday night, less than half the crowd for the 1-0 win over Venezuela in January 2012, the last time the USA played in Glendale to open the year.

"We can't control a lot of those things," said Berhalter when asked what can be done to bring back fans. "Our job is to keep working hard and develop a team people like to watch and our proud of."

Newbies come through. Any positive steps must be taken in context following the collapse of the program with the loss in Couva, but what was most impressive about the win was how well some of new players played. They might not be ready to start when the full team is available but they will certainly provide competition.

Two of the three goals came from players making their first appearance -- Djordje Mihailovic and Christian Ramirez -- as did all three assists -- Corey Baird, Nick Lima and Jonathan Lewis.

"It's nice to put in work like that over an extended period and get a reward," said Berhalter. "The guys should be proud of themselves. They worked hard in San Diego and it's nice to see it paying off."

The most encouraging aspect of the win was how well some of the uncapped players did.

Open mindset. Lima, who started every game for the San Jose Earthquakes in 2018 on one of the worst MLS teams in history, got the nod on the right side ahead of Reggie Cannon and Keegan Rosenberry.

Berhalter said Lima, who set up Walker Zimmerman for the second goal after winning the ball away from Panama on the counterattack and served a perfect ball into the area, thrived with his open mindset and willingness to improve and not be afraid to put himself in positions he hasn't been in before.

"It's not easy for the right back to play with his back to goal," Berhalter said. "It's not easy to ask him to play in midfield to create space for others. But he did a good job. He competed on every play. The second goal is a great example of that, winning the ball in transition and putting a great ball in. We were really happy with him. He showed he had a good understanding of the game."

Gratifying moment. Mihailovic, who is only 20 and eligible for the 2020 Olympic team as an under-23 player, improved throughout the two-week camp in Chula Vista.

"He's smart soccer player," said Berhalter. "If you slow it down and look at some of the small things he does, you can understand how intelligent he is. A proud moment for a coach comes when you select a player to play and he performs. I can just imagine how proud he is and how proud his family is. That's a gratifying moment for a coach."

Berhalter said he has not built the team's style of play in a vacuum but is thinking ahead to when he brings in players, mostly in Europe, who weren't available for January camp.

"We had that in mind when we were envisioning the structure of the team," he said, "when we were projecting some guys and what positions they can play and how we can teach them and how we can train them and what the sessions need to be. But right now, the focus is on working with this group of players."

On the basis of the first game, they have certainly given Berhalter something to build on when the full team is available for the first time in March.