The European version of handball has been staging its men's World Cup in Denmark and Germany over the past few weeks, and German commentators in particular have been drawing parallels between the conduct of the game's players and their brothers on the soccer field. Soccer's whining, theatrical and very well-paid stars have been unfavorably compared with the apparently down-to-earth, modest and sporting young men of handball, who nonetheless spend much of the game wrestling each other to the floor. 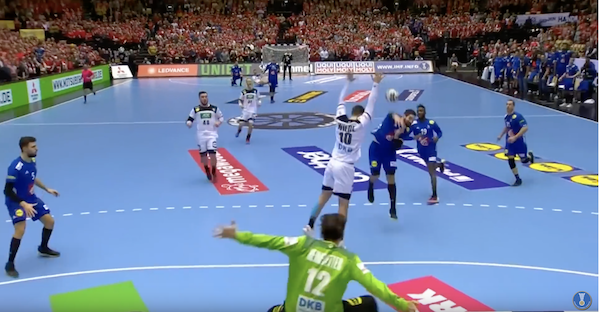 It's a dubious endeavor to fill column inches and to provide the platform for some facile generalizations (a journalistic specialty, I admit). However, it's worth drawing some parallels between the two sports to highlight how a simple rule change could help to make soccer a more watchable and more sporting discipline.

In soccer a slow-motion replay, repeated several times, may still not prove whether a foul was committed. In handball -- despite a much more complicated definition of what constitutes a foul -- there's no time for that. The decision's given, and the game moves quickly on, unless there's an injury or a timeout. This seems to be the principal reason why there's so little dissent. The players are not better sports. Rather, it's just not practical to waste a single second moaning about the call when play has promptly resumed on such a small court. Defenders have to get back to the game.

Soccer players waste way too much time dallying over free kicks. Teams would benefit more from dead-ball situations if they were executed swiftly, and before their opponents have had the opportunity to reorganize. So many promising attacks are halted by fouls, and then -- after much delay to issue cards, assuage the whiners, and force encroaching defenders to retreat -- a lame cross is headed clear, caught by the keeper, or floated out of bounds.

In short, it nearly always pays to foul in soccer -- momentum is lost, possession is wasted from the resultant free kicks, and the punishments for infringement are too lenient. 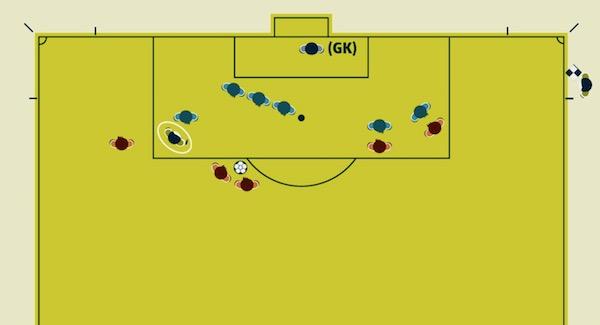 You can coach a team to take a quick free kick, but that doesn't mean they'll be savvy enough to pull it off during a game. They may be squaring up to the player who fouled them, upbraiding the referee for not showing a yellow card to that same offending player, or even as amateurs they're acting like pros -- adjusting their socks (or their hair), yelling useless directions to their teammates, weighing up an impossible 40-yard shot, and failing to play a quick pass down the right to the overlapping outside back. Provided the back is awake enough to remember last Tuesday's practice drill.

The other problem is that a defending player will likely be standing right in front of the ball, just in case the attacker really is smart and alert enough to take a quick free kick. Referees will only give a yellow card against this encroachment if the kick is quickly taken and the defending player moves their body to block it. Otherwise the encroaching player only moves when ordered to do so by the referee. It's another example of soccer allowing poor sportsmanship to slow down the game and encourage deathly tactics.

There are two possible ways around this. The first would be a FIFA directive, or a more clearly worded law, that referees must punish players for standing in front of the ball after a free kick's awarded -- that is, an immediate yellow card for blatantly failing to respect the 10-yard rule. A possible downside is that this would, initially at least, mean more delays, more moaning and arguments, and more pressure on referees.

The second option would be to allow the player taking the free kick to touch the ball more than once. It seems odd that the team whose player has been fouled is then placed at a disadvantage by virtue of the one-touch restriction. I can think of no good reason why this law exists, other than that it's been around for so long that no one dares to adjust it.

With a rule change allowing unlimited touches from a free kick, the player taking the kick would enjoy several more options. They could, for example, set off on a dribble before the opposing side has had time to re-group. They could tee the ball up to themselves and take a quick shot on goal. The more advantages that are given to the attacking team, the fewer fouls we'd see that slow down the game and reward illegal play.

This 'unlimited touches from dead ball situations' rule could also be extended to corner kicks. Then we'd hopefully see less of the dreary holding, pushing, tugging and wrestling melees in the six-yard box, most of which result in absolutely nothing, and where multiple fouls go unseen and unpunished.

The handball World Cup wrapped up on Sunday when Denmark beat Norway to take the championship. Germany finished fourth, so soccer will now quickly return to its rightful place as the country's runaway most popular sport. Its players can avoid further unflattering comparisons with their apparently more wholesome and morally inclined counterparts.

Any given sport, though, is only as wholesome and moral as its rules allow. Soccer could easily take a few cues from other sports to improve its flow and curtail foul, game-spoiling play that's long since become entrenched as a negative norm.