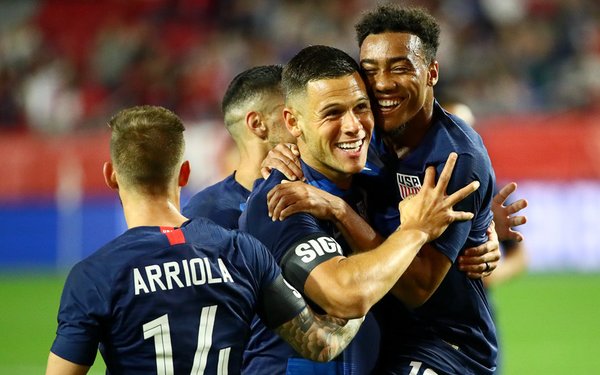 None is older or traveled farther to make the national team than 27-year-old forward Christian Ramirez, who came off the bench to score the third goal.

"It has been a long journey to get here," he said afterwards. "It's been a different path."

-- Ramirez was born in Santa Ana, California, to Colombian immigrants but spent part of his youth in Colombia before returning to Southern California, where he grew up in Garden Grove.

-- He wasn't drafted out of college so he began his pro career with the third division Charlotte Eagles in USL PRO before graduating to Minnesota United, then in the NASL.

-- In 2018, he was shipped in mid-season to LAFC in a controversial move that disappointed Minnesota fans and was only made worse when his replacement, Colombian Angelo Rodriguez, scored only one goal in his first six starts after signing as a Designated Player.

Ramirez scored twice in his first start for LAFC and didn't score after that in the regular season, but he did enough in Minnesota -- 21 goals in 50 games -- to catch Gregg Berhalter's attention and get a call-up as one of three forwards along with Gyasi Zardes and Jeremy Ebobisse.

It wasn't Ramirez's first call-up. He was called up by Dave Sarachan a year ago to the January camp, but didn't get to play in front of his family when the USA played Bosnia-Herzegovina at the StubHub Center in Carson. He didn't even dress for the game that ended 0-0.

"I used it as fuel all year," he said on Sunday night. "It was a learning experience. I felt like I really wasn't myself. I brought myself into this camp and really showed who I am to the staff and I am just happy to contribute."

Ramirez's goal was a tap-in following a run into the area by Jonathan Lewis, the other debutant coming off the bench.

"We talked about it at halftime," he said. "If we got isolated, I'd be inside the two posts, and if he can slide a ball in to me, I'll be there. Credit to him -- an incredible play. I did the easy part and tapped it in."

Ramirez said the game was a special moment -- made even more special because his family made the trip from California for the game.

"I am thankful for my teammates and coaching staff for believing in me to bring me to this camp," he said, "and it is an honor to represent this country. And to have my family, wife and baby here means a lot."