Almiron deal: Win-win all around 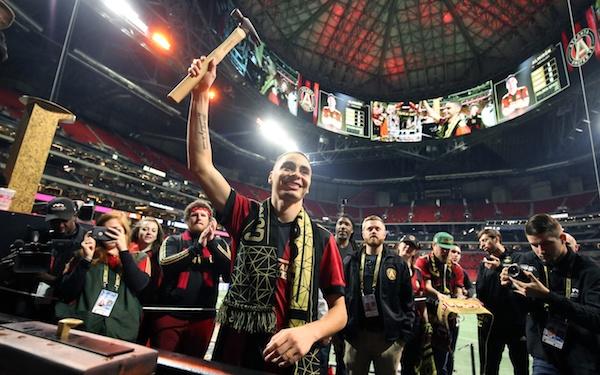 Despite falling behind after only 25 seconds and having just 23 percent of possession, the Magpies rallied to beat defending EPL champion Manchester City, 2-1. The upset win ended City's eight-game winning streak but more important temporarily moved Newcastle up three spots to 14th place and five points clear of the drop zone.

Under-fire Benitez outwitted fellow Spaniard Pep Guardiola and justified his move to field mostly reserves in the the FA Cup fourth-round match Newcastle lost at home to Watford on Saturday and save seven starters, including American DeAndre Yedlin, for Tuesday's match.

But the Spaniard also got good news before the game that the Newcastle was set to break its record for a transfer fee and sign Paraguayan Miguel Almiron from Atlanta United.

Almiron was traveling to Newcastle on Tuesday to complete the deal British reports valued at 20 million pounds ($26.2 million), breaking the record of 16 million pounds for the signing of Michael Owen from Real Madrid in 2005.

"Hopefully, we can finish everything on Wednesday," said Benitez after the Manchester City game. "I knew before the game we were doing some business, so hopefully we have some good news. We are working on some things. If we have good news tomorrow, it's positive. It's not about a record signing, you have to do the right things to stay up."

With England's January window closing on Thursday, the completion of Almiron's transfer will also be good news for Atlanta United.

The Five Stripes have already signed Almiron's replacement, 2018 El Rey de America Gonzalo "Pity" Martinez, and needed to unload one of its other three Designated Players to get down to the maximum of three.

Few clubs are willing to spend big money in January, and Atlanta United struggled to find takers for their $30 million price tag. If confirmed, Almiron's fee, however, will be the sixth largest in the world during the January window.

By completing the deal, Atlanta United also fulfilled on its promise to Almiron to find an EPL club for him -- in this case, an EPL club that looks more likely after Tuesday to stay up.