In Gregg Berhalter's second game at the helm, following last week's 3-0 win over Panama, the USA outplayed and beat Costa Rica, 2-0, on Saturday. Especially dominant in the second half, the USA got its deserved win with goals from Sebastian Lletget and Paul Arriola. There were two changes from the starting lineup against Panama. Wil Trapp took Michael Bradley's defensive midfield spot and Arriola started in place of attacker Jeremy Ebobisse.

GOALKEEPER
Zack Steffen needed to make only one save, an easy one, and snag a couple crosses. His goal kick, nodded on by Christian Ramirez, helped set up the USA's second goal.

DEFENDERS
Right back Nick Lima often moved into the midfield, in the 54th minute hit a rocket against the post, and in the 60th won a corner after dribbling past two Ticos on one of his threatening forays. The central defense duo of Walker Zimmerman and Aaron Long won all the high balls and helped limit Costa Rica to one shot. Left back Daniel Lovitz was generally strong on the ball and connected nicely with winger Paul Arriola in the second half. 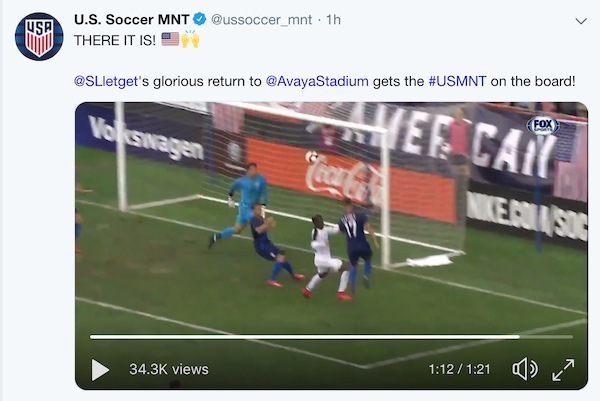 MIDFIELDERS
Six Costa Rica fouls (and a lenient ref who didn't show a yellow until the fifth) stifled Djordje Mihailovic, who was subbed in the 62nd minute. Wil Trapp passed perfectly throughout the second half, and one of his two excellent cross-field balls led to the first goal. Roldan, who almost made up for his 8-yard miss in the 51st minute with a well-taken 22-yard volley that hit the post in the 69th, toiled so the frontline players had few defensive responsibilities. 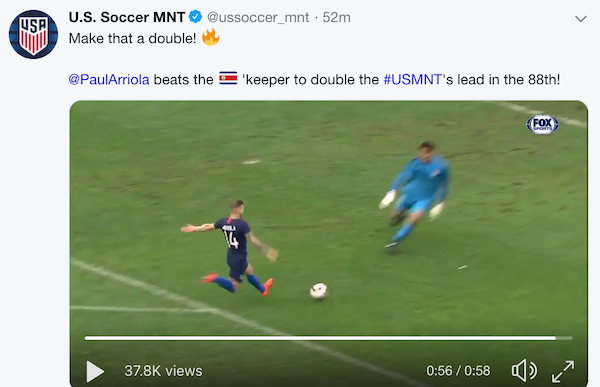 FORWARDS
Corey Baird failed to serve from the right wing. He shot wide and headed high on two chances. Gyasi Zardes, who shot weakly to the keeper from long range in the first half, harassed Costa Rican defenders but didn't resemble a goal-dangerous center forward. Paul Arriola, who troubled the Ticos backline some in the first half, became a big threat down the wing in the second half. He set up Roldan's big chance and he beat goalkeeper Esteban Alvarado to the ball -- and survived the keeper's late challenge -- to score the USA's second goal.

SUBSTITUTES
All three subs made an impact, especially Sebastian Lletget. He headed home Jonathan Lewis' cross to make it 1-0 and -- after latching on Steffen's goal kick via a midfield header from Christian Ramirez -- sent the through ball to Arriola on the second U.S. goal.

TRIVIA: With the win, the USA evened its all-time record against the Ticos: 16 wins, 16 losses, and six ties.