Sean Dyche. Coach at Burnley, in the English Premier League. He’s having a difficult season, down at the wrong end of the league, trying to avoid relegation.

Dyche has been getting his name in the news quite a lot lately. Doing a lot of complaining. Making a lot of excuses, some would say.

Two things have been getting on his nerves. Diving for a start. He repeatedly rants against divers. He sees them everywhere, all the time. “It’s embarrassing. I see them all diving ...” he said recently. All of them? Oh yes, and Dyche, sounding increasingly beleaguered, alleges that FIFA and UEFA and the Premier League aren’t doing anything to rein them in.

The other thing that grates with Dyche is the fact that Burnley have played over 60 games without gaining a single penalty kick. Surely an extraordinary stat, one that really does sound like something to bitch about. True, I don’t have statistics for what would be the norm, but I’d be damn sure it’s well below 60.

However, this past Saturday there was good news for Dyche. In its game against Southampton, Burnley was -- at last! -- awarded a PK. It came in the 95th minute, almost the last kick of the game, and enabled Burnley to tie the game 1-1.

Truth is, Burnley should not have had to wait that long. They should have had a penalty kick much earlier, in the first half, when Southampton goalkeeper Alex McCarthy raced out of his goal and flung himself at the feet of Burnley’s Ashley Barnes. McCarthy made no contact at all with the ball -- didn’t get anywhere near it -- but he did make a lot of contact with Barnes’s legs and feet. Down went Barnes, and up came referee Anthony Taylor to give the glaringly obvious penalty kick.

But Taylor did not give a PK. He turned his bad non-call into what was undoubtedly one of the most appalling referee decisions I’ve ever seen -- by giving Barnes a yellow for diving (simulation, to use the rulebook term).

A tricky moment for Sean Dyche. Here he was, the scourge of the divers, with one of his own players booked for diving. That player, Barnes -- with just about as much provocation as any player should be expected to put up with -- was now beside himself, yelling in referee Taylor’s face, and in imminent danger of getting himself ejected. 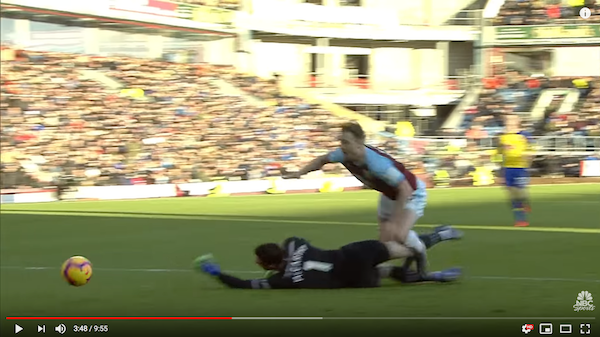 Barnes calmed down (and did get some satisfaction as the scorer of that late, game-tying penalty) -- but that still left Dyche with a problem.

Because Dyche, in his rants against diving, has always claimed that he could spot all sorts of diving episodes that referees were missing or ignoring. Never, ever, does Dyche allow any doubts. He is never wrong when it comes to sniffing out diving.

Now here was an EPL referee, coming up with a spectacular blunder to demonstrate, beyond all doubt, that diving is very much in the eye of the beholder, that it might be -- as it surely was in this case -- pure invention.

All Dyche could come up with at the end of the game was to say that he was “baffled” by the decision.

That Burnley should have had a penalty is without doubt. But for Dyche to express bafflement because they didn’t get it is a bit much. Dyche has evidently studied plenty of diving incidents (afer all, he sees “them all doing it”), which must include plenty that are called by referees, as well as those that he claims go unpunished.

And he’s never seen a dubious call? Never been in two minds about his own judgments? Has he ever given the benefit of doubt to the “diver” rather than the tackler? It looks very much as though Dyche’s answer to all those questions would be a scornful No. But not when his own player is involved ... then he is baffled.

He shouldn’t be. It is precisely the atmosphere created by him and his anti-diving cohorts that has created the unbalanced atmosphere now surrounding the issue. That leads directly to ludicrous calls of the sort made by Anthony Taylor. (There was another very dodgy diving call on Sunday, made by referee Martin Atkinson against Man City’s Ilkay Gundogan -- a call so questionable that it should not have been made).

That is bad enough, but there is a much darker side to Dyche’s diving obsession. He likes to contrast diving with what he calls “good honest tackling.” We saw some of that when Burnley played Liverpool on Dec. 5 last year. Liverpool won the game, but coach Juergen Klopp was incensed at what he saw as dangerous slide tackling by Burnley -- he even complained to the referee.

Dyche duly backed his players, but his argument was seriously undermined by the fate of Liverpool defender Joe Gomez, stretchered off with a broken leg after a tackle from Burnley captain Ben Mee. Gomez has already been sidelined for two months -- the latest news is that he will now need an operation on the leg.

The awkward part of all this -- for Dyche -- is that everyone (including Klopp and Gomez) agreed that Mee’s tackle was fair. The serious injury was just “unfortunate” said Mee. But there was no escaping the fact that one of Dyche’s good honest tackles had caused a serious injury.

I suppose some good may yet come from referee Taylor’s colossal blunder ... if it causes Dyche to calm down and take a measured look at both diving, which he is wildly exaggerating, and at good honest tackling, whose dangers he is greatly underestimating.

england, referees
1 comment about "At last Burnley gets a penalty kick -- but Coach Dyche still has a major problem".
Next story loading