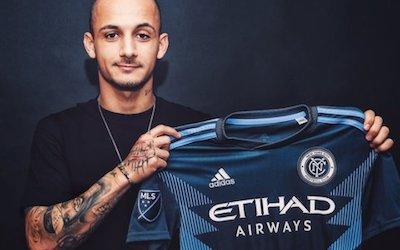 New York City FC hasn't found a player-for-player replacement for David Villa, but Alexandru Mitrita was acquired for a reported $8.5 million, which would be the third highest transfer fee an MLS team has ever paid for a player after Atlanta United's deals for Ezequiel Barco, signed for the 2018 season, and Gonzalo "Pity" Martinez, signed for the 2019 season. Michael Bradley also joined MLS for $8.5 million.

Alexandru Mitrita, NYCFC's third DP after Jesus Medina and Maxi Moralez, is a 23-year-old attacker acquired from Universitatea Craiova in his native Romania.

Mitrita, whose transfer is also the third most expensive in Romanian league history, is not an out-and-out striker like Villa, who left NYCFC after four seasons and moved to Japan's Vissel Kobe. He usually plays as an attacking midfielder or winger.

“I’m very happy to be a part of this team and I’m looking forward to getting started,” said Mitrita, who has joined NYCFC in Abu Dhabi, said in a club release. “It is a great joy for me and I will do my best to play at a high level. I want to make everyone who believes in me proud that we were able achieve this transfer. I know this is a good group and I’m going to a club where young players can develop and grow. The team has a very good coach who has experience with lots of great clubs in Europe.”

Spaniard Dome Torrent is in his first full season as NYCFC's head coach after taking over for Patrick Vieira last June.

“We’re very happy to have signed Alexandru because it was one of our main objectives in the offseason," Torrent said. "He’s a dynamic and versatile attacking option who can play in many systems. Alexandru has had a great year in Romania where he’s scored lots of goals and has been very dangerous in the attacking play and in 1 v 1 situations. He’s a player with plenty of experience in Europe, having played at the highest level in both Romania and Italy. I know he’ll be able to come to New York and be a key leader in our attacking front.”