While Stephen Negoesco  was coaching some of the greatest college teams in history, he didn’t prowl the sidelines. 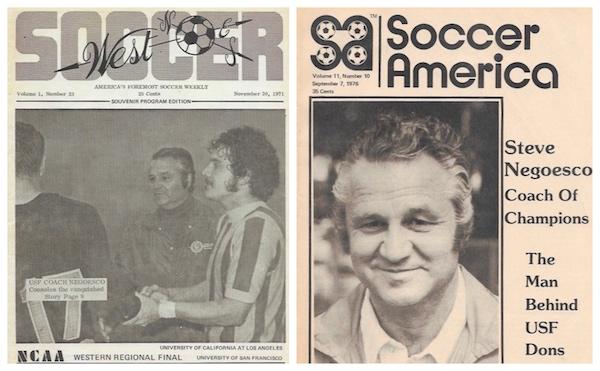 “I don’t argue with referees,” he told me in a 1991 interview. “I don’t coach from the sidelines. I go sit in the stands. I always have.”

The University of San Francisco won five Division I NCAA finals in Negoesco’s 1962-2000 tenure, during which he became the first college coach to win 500 games.

“I can see much better from there,” he said. “I don’t complain and offer my players a crutch for why things may not be going well.”

Lothar Osiander, a German immigrant who would go on to become U.S. national team coach, was part of USF’s 1966 national championship team.

“We stepped onto the field and wondered where he had gone,” said Osiander. “Back then, we played at Balboa Stadium and he would go into the press box. He’d come down at halftime or after the quarter – when we still played quarters – and make some adjustments.

“It was a respect type of relationship. He respects the players for being players and they respect the coach for being a gentleman and for being the kind of coach he is.” 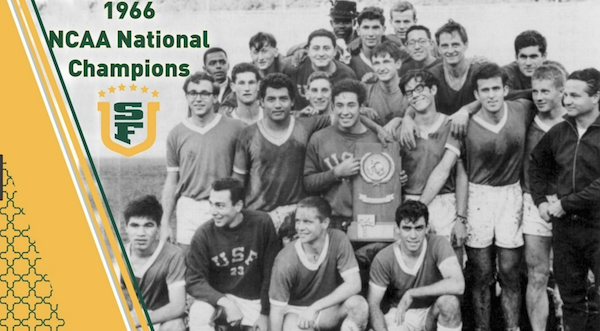 A players’ coach. Back in that 1991 interview, Negoesco talked about his method of balancing structure – “some amount is good” – with giving players a chance to "use their imagination." He recounted an example of telling a defender to contribute to the attack:

Player: “How often should I go up?”

Negoesco: “As much as you like, as long as you get back in time.”

Player: “When will I know I should go up?”

“He certainly was a players’ coach,” says Glenn Van Straatum, who came to USF from Suriname in 1978 after Negoesco met Van Straatum’s youth national team coach at a coaching course in Mexico. Negoesco was always on the lookout for foreign talent with academic aspirations.

“Steve respected the players a lot,” says Van Straatum, now Academy Director of East Bay United/Bay Oaks. “He would say, ‘Here are some of the ideas that I have, what do you guys think?’ It was very empowering. He allowed us to make decisions. It got the best out of us.”

‘A soccer dad.’ USF was known as a “United Nations” team, with players hailing from Europe, Africa and the Americas.

“It was very strange for us,” says Van Straatum. “Because back then there were no other examples of teams with players from so many countries. Now, of course, ‘UN’ teams are the norm. Steve was a visionary in that way. And it was magical how he could find right words to get everybody on the same page.”

The diverse group of players that Negoesco fielded included Alejandro Toledo, who went on to become the President of Peru in 2001-2006. He also provided the platform for Bay Area product John Doyle to become a 1988 Olympian and 1990 U.S. World Cup player.

USF players like Van Straatum arrived in San Francisco without connections beyond the university and the team, far away from their families.

“He took care of every player like a dad would,” Van Straatum says. “He was a father figure off the field. And on the field, he created a unique style of play with a diverse group of players. For decades after we played for him, the alums from 20, 30, 40 years, we stayed connected to him and feel the same gratitude.”

The first West Coast all-American. Negoesco was born in Jutland, New Jersey, in 1925. When his mother died, he was sent back to Romania to live with relatives. The move turned him into a soccer player, but otherwise, the timing was bad. The Nazis invaded Romania in 1940. When they discovered his American roots, he was sent to a concentration camp at age 15.

"I got friendly with the guards," Negoesco told Scott French in a 2000 Soccer America interview. "They were kids, 18, 19 years old, and we found a common ground. We were all soccer players. ... So after a couple months, I said to one of them: 'You know, I've been thinking about running away.'”

One of the guards advised him on a good day to escape, and Negoesco fled back to Bucharest, "Where the Germans never thought I'd be stupid enough to go,” Negoesco said.

He returned to the USA after World War II, settled in the San Francisco in 1947 and enrolled at USF. He was the West Coast's first first-team All-American collegiate soccer player in 1949 and helped USF to its first national title in 1950.

The collegiate teams he coached may have been known for their foreign talent, but in the meanwhile Negoesco spurred the growth of youth soccer in the Bay Area and coached youth teams in San Francisco and Marin County for decades.

In 1961, he coached Hakoah of San Francisco to the McGuire Cup title, the first national youth championship for West Coast team.

While guiding USF to national titles in 1975 and 1976, he also coached San Francisco Italian Athletic Club to the 1976 U.S. Open Cup title.

After 39 seasons, Negoesco retired in 2000. That’s when French interviewed him and pointed out how important Negoesco was for California soccer: “The West Coast, was nothing soccer-wise before Negoesco. He was on the forefront of everything -- recruiting foreign athletes, playing a national schedule, building a soccer-specific facility.” Negoesco actually contributed personally to the construction of the USF stadium that bears his name, pouring 49 cubic yards of cement.