How to keep kids playing? Offer something different

It’s a common refrain, everywhere from the Aspen Institute’s Project Play to U.S. Soccer itself. Players disappear from organized soccer, and we should blame overbearing parents, insensitive coaches and excessive costs.

All valid concerns. But if you reel in the parents, reel in the costs, and get coaches to quit coaching Division 5 U-14 games as if it’s Barcelona-Real Madrid, you will still have players leaving organized soccer when they hit middle school.

One factor is something else we’re all preaching. We want kids to play multiple sports and avoid specializing too early. But by age 14, if not age 12, most kids who are serious about one sport will be playing that sport. As it stands now, we would record that as a “loss” even though the player and parents are doing what we suggest. If a player chooses soccer over baseball, it’s a “loss” for baseball. If she chooses lacrosse over soccer, it’s a “loss” for soccer. That’s zero-sum thinking.

We may not even be losing players to other sports but to other activities. Kids who were playing travel soccer and taking dance classes at age 11 may focus on the latter at age 13. In my home of Northern Virginia, joining a marching band is every bit as all-consuming as playing a varsity sport -- intense camp through August, practices most days during the week, games on Fridays and then competitions on Saturdays. (We’re state champions, and don’t you forget it! Also, quit all your other activities, and you can’t be in any of our concert bands if you’re not also marching.)

We also have this time-consuming activity called “school.” Even if a kid isn’t taking four AP courses, the workload for a high school junior is exponentially bigger than that of a third-grader.

So it’s unrealistic to think we’re going to retain 100 percent or even 75 percent from age 12 to age 18 in organized soccer.

A lot of “recreational” programs aren’t really recreational. They’re practicing twice a week. The parent coaches are every bit as intense as the “professional” 25-year-olds coaching the travel teams. They have small rosters because they don’t want players sitting on the bench, only to find that they’re scrounging for a full 11 on gameday because players have band. Dance. Cross-country meets. STEM workshops.

We’re “losing” players because they can’t commit to two practices and a game every week. And there’s absolutely nothing we can do to change that.

So why not offer something different? 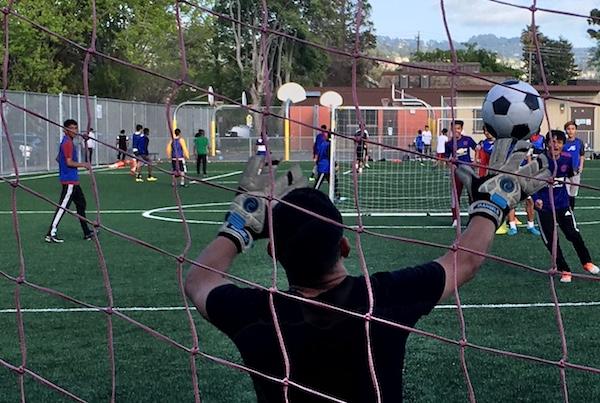 We can lament the fact that we don’t have a “pickup” soccer culture, at least not everywhere and certainly not one that compares with basketball. I didn’t play organized basketball after third grade, but I spent plenty of time getting shots swatted in my face by my friends (for some reason, they were all taller) in driveways and on courts at schools and in parks. That was enough for me to attempt intramural basketball and continue playing pickup in college. (My highlight was stealing the ball from a Duke football player and racing the other way for a layup.)

Ideally, with the help of the U.S. Soccer Foundation and other organizations, the soccer community will have enough fields and enough interest to have regular pickup games.

Until that happens, youth clubs need to make it happen.

Allow players to register as pickup players, paying a small fee to cover basic insurance and administrative costs. Open the doors for those players one night a week, maybe with a signup in advance so you know you won’t have 200 players or just two.

You could even allow players to sign up as “spares” -- players who can fill in if a recreational team is short-handed one week. Our adult indoor soccer team couldn’t have functioned without a handful of alternates. Conflicts happen.

A Washington Post piece on kids quitting sports put it best: “Our culture no longer supports older kids playing for the fun of it.”

We need to find a way to change that. By age 14, players usually know whether they have the aptitude or the interest to play for a high school team or beyond. The rest are playing for fun, and those experiences will instill a life-long love of the game.

Offering more recreational options won’t give us more elite players. But it won’t hurt. (If you’re concerned about field space, consider the prospect of having more players taking up space once a week for free play rather than three times a week for practice and games.) And offering good experiences in the game will keep people interested long enough to be the next generation of fans and parent coaches.

We may “lose” players to basketball and band. It’s going to happen. The question is whether we’re leaving the door open or slamming it behind them.