U.S. midfielder Joel Sonora breaks through in Argentina and aims to follow in father's footsteps

When Talleres de Cordoba take the field Wednesday night in its second leg of its Copa Libertadores series against Sao Paulo, it could be the latest step forward for American midfielder Joel Sonora, who is off to an impressive start to 2019.

Sonora, 22, has been with Talleres since January of 2018 but has only recently seen an upward trend in playing time. On February 1, the first slate of games following Argentina’s winter break, he scored his first goal in Argentina’s SuperLiga on a low-driving rocket from outside the box to cap a 3-1 win over Banfield. 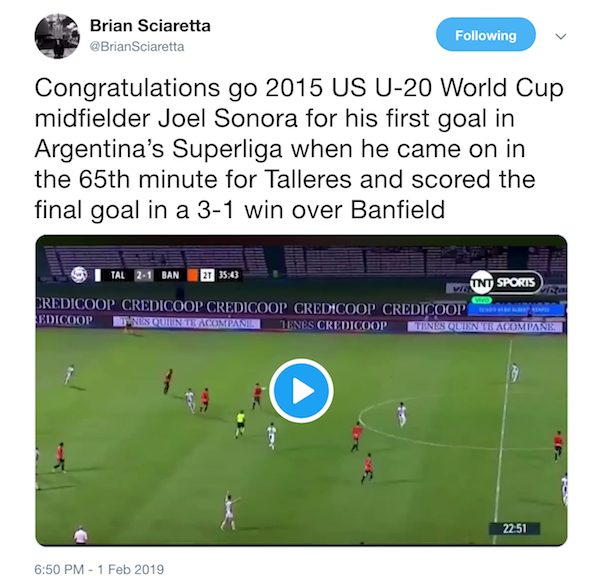 The momentum from that goal continued last week when Sonora was a late substitute in the first leg of Talleres de Cordoba’s 2-0 win in the first leg of its Copa Libertadores tie against Sao Paulo. Then on Saturday, Sonora earned the start on the road when Talleres played to a tough 0-0 draw against Atletico Tucuman, a club that currently sits fourth-place the Superliga.

After a long week of travel that saw him travel from Cordoba to Tucuman, in the northwest part of Argentina, and now to South America’s largest city in Sao Paulo, Sonora is ready for a tough second leg where it will try to hold on to its 2-0 advantage from leg one. If successful, it would advance to the third qualifying round (it had a bye for the first round) before the group stages begin.

So far this month, it has been a significant upturn in responsibilities for Sonora, who played fewer than 300 first-team minutes in the Superliga before the winter break. But he is also optimistic that this will be the new norm for him moving forward. Sonora prefers to play the No. 10 role and feels most comfortable in that position although he adds he can play the box-to-box role as a secondary position as well.

“To be honest, I am really happy,” Sonora told Soccer America. “I want more and more every time, but it's good and going well. I feel like it will be like this moving forward. I hope that happens. The goal [against Banfield] was something amazing. I was working for a long time to get that. When I scored, I was so happy and I was enjoying the game.” 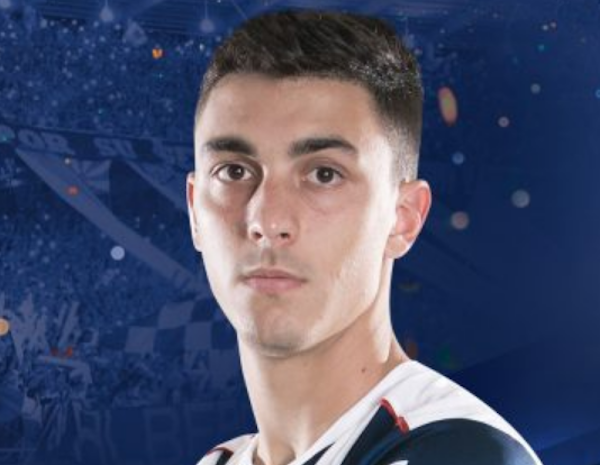 But Wednesday will be a huge test for Sonora and Talleres as Sao Paulo is historically one of Brazil’s strongest teams.

“We worked for that game,” Sonora said of the first-leg win over Sao Paulo. “It was really intelligent. We did a great a job and Wednesday night we will try to finish it. They will attack a little bit more but we have to be patient, work hard our defense and hit them on the counter attack. We need to think about Wednesday only and get the result - then move forward.”

While his appearance in the first leg was only brief, Sonora became just the 14th American player to have ever played in the prestigious South American tournament. The moment was not lost on Sonora who noticed right away that this was a major event. And with his recent league performances, there is a chance he could play a bigger role in the second leg or in future Libertadores games should Talleres advance.

“It's something inside you that you've never felt before when you play in a game like that,” Sonora said. “It's new. You get a little bit nervous, everyone is talking about these games and everyone is watching. It's a great moment and I was happy. We were enjoying the game because we were winning, so that was better.”

Sonora’s journey in his soccer career is certainly unique. His father, Diego Sonora, played in over 200 games for perennial Argentine power Boca Juniors before playing in the United States from 1996-2001 for the Dallas Burn, MetroStars, D.C. United, and finally the Tampa Bay Munity. While he was in the United States, Joel and his brother Alan were born. When they were young children, however, they returned to his parents’ native Argentina where they were raised and blossomed into soccer players. 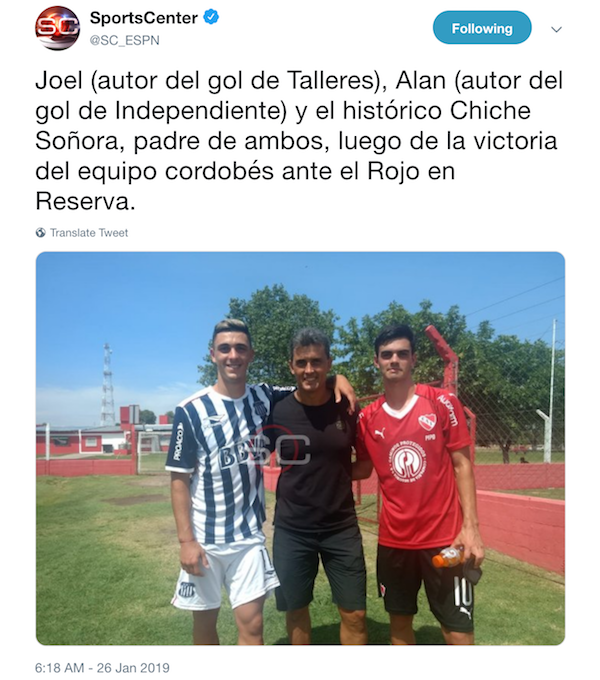 While Joel Sonora grew up in the Boca Juniors academy, he never lost his connection with the United States thanks to his involvement with U.S. youth national teams. It started with the U-17 team and was followed by the U-20 team – where he participated in the team’s run to the quarterfinals of the 2015 U-20 World Cup in New Zealand.

Following that tournament, Sonora moved to Europe to sign with VfB Stuttgart in Germany. The move, however, was difficult for him and he eventually returned home to Argentina. At first it was a loan to Talleres but later the deal became permanent.

“To be honest, the start wasn't good,” Sonora explained. “I went alone and it was a different culture. It was really hard for me. In the second year I felt better. Unfortunately, I didn't have that opportunity to play with them but I was feeling better every day. Then I made the decision to return to Argentina so I could play more. … I am with Talleres now and my contract with [Stuttgart] is finished.”

But as Sonora prefers to be close to his family, he also acknowledges that he has a desire to follow in his father’s footsteps and play in the United States. While his father’s move from Boca Juniors to Dallas was unusual for its time, the modern dynamic of MLS has seen a wave of very high profile South American players and coaches move their trade to the United States. Pity Martinez, Miguel Almiron, Kaku Gamarra, Nicolas Lodeiro, Josef Martinez, Tata Martino, Guillermo Barros Schelotto, and Ezequiel Barco are just a few prominent additions to the league in recent years.

This influx of South American talent is certainly not lost on Sonora, or his younger brother Alan who plays for the youth teams of Independiente.

“Every time MLS is an option,” Sonora said. “I really want to do it, I don't know when. But I will do it. I will have that opportunity. I want to follow what my father did. It is a little dream I have. MLS is bigger as a league. It's also a good option. It's like I said before, the league is getting big and is getting good. The teams are performing. Even leagues from Europe are watching too. I think that is why people are talking about it more down here.”

“When I made the decision to come to Talleres,” he added. “I was away from my family for two years and I am close with my family. I missed them. I am a guy who always spends time with his family. That was one of the biggest things. I also really wanted to play in Argentina's league.” 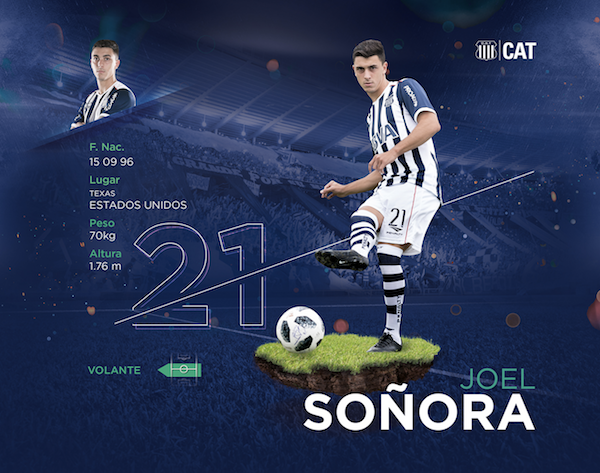 But playing in the United States is not Sonora’s only American dream. He also wants to return to its national teams. He follows the U.S. team and sees how some of his former U-20 World Cup teammates like Matt Miazga, Paul Arriola, and Zack Steffen are now getting regular call-ups.

For Sonora, he knows that following in their footsteps will only come with success at Talleres and obviously the Libertadores is a big stage. While he grew up in an Argentine household to an Argentine family, he takes pride in being the only American currently in the Superliga and enjoys his connection with the country of his birth. It’s something that he hopes continues and grows stronger in the years ahead – both at the club level and the national team level as well.

“I am proud I am an American,” he continued. “[With U.S. citizenship], everyone wants it. It feels great. With my brother, we both have the same opinion. I obviously have my Argentinian way to live and my whole family is from Argentina. It doesn't feel like I am different. It feels good when I hear people from the United States are watching me or people there send me messages. That is where it feels great.”