A diving call in England that invites open derision

What’s this, then? High noon at Wembley? Actually, a little later, around 3:15 p.m. Sunday, February 10. These are the guys with a problem -- 25-year-old English defender Harry Maguire from Leicester City, and Son Heung Min, 26-year-old South Korean forward from Tottenham Hotspur -- seen menacing each other with their imaginary finger pistols. The cause of the showdown? A clash -- a “coming-together” as the vogue phrase rather neatly and neutrally puts it -- in the Leicester City penalty area. 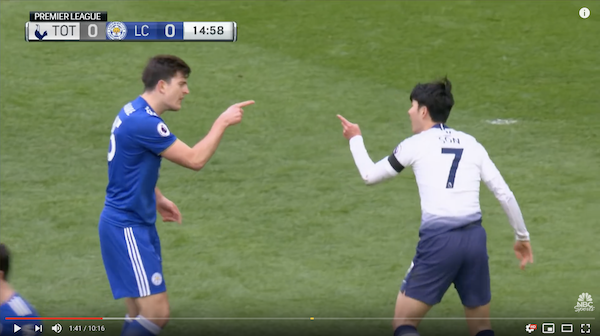 At issue: did Maguire foul Son (did he trip Son with his tackle)? Or was the tackle quite legal, and Son took a dive? Take a look ...

[ABOVE LEFT] This is how it started. A poor pass from Spurs’ Christian Eriksen, intended for Son, is intercepted by Maguire. Maguire’s sloppy control allows Son to dart in and steal the ball. Here Son is using his right foot to move the ball to his left, away from Maguire. [ABOVE RIGHT] Maguire has decided he can reclaim the ball and is about to launch a tackle, using his right foot. Son continues to nudge the ball away from him. 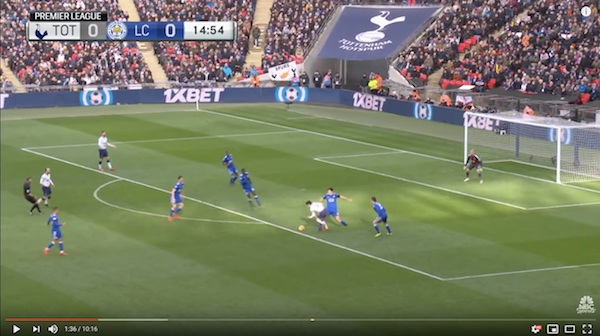 Referee Michael Oliver [above, extreme left] seems well-positioned. Maybe he could be a bit closer, but that’s almost a cliche when talking of refereeing. He’s about 10 yards away from the action, which is OK. Or it would be, except that a Leicester defender -- No. 6 Jonny Evans -- has managed to plant himself slap-bang between Oliver and the action -- a position that must surely have interfered with Oliver’s sight line.

This is how the action proceeded:

[LEFT] Maguire is now committed to his tackle. He is stretching his right leg in front of Son’s legs, across his path, in an attempt to poke the ball away. [RIGHT] Maguire’s right leg is at full stretch. His right foot is now firmly on the ground, having got as far as it can get. He comes very close, but the ball, nudged by Son, is rolling away from him. Maguire does not reach the ball. But his right leg, having failed as a tackling weapon, is now a solid obstacle directly in the way of Son’s right leg. Son duly trips over it, goes to ground ...

With Son on the ground referee Michael Oliver takes over and immediately stops play to give Son a yellow card for diving. No hesitation by Oliver, not even a hint of doubt in his decision-making. Now, Oliver is one of the best EPL referees . . . but did he get this one right?

For sure, this was not the easiest call to make. But Oliver’s decision was so immediate and so peremptory that you have to assume that he felt he knew at once what had happened. If one believes - and I certainly do - that a tackle in which the tackler does not make contact with the ball but does make contact with the opponent, is automatically a foul, then Oliver’s certainty that there was no foul can only mean that he believes Maguire touched the ball. Something that did not happen.

The question then becomes: Did Maguire make physical contact with Son? Yes, there was there contact. Did Maguire trip Son? My answer is yes, he definitely did.

But there is a different way of looking at actions like this one (the alternative facts, if you like), one that frankly dismays me, but one that I have heard offered for serious consideration in previous cases. It goes like this: Son did trip over Maguire’s leg, but when Maguire jabbed out his leg he did not make contact, that came an instant or two later when Son ran into the leg. So it was Son who initiated the contact.

A semantic distinction, not one with any meaningful practical application. Except that it contains the implication that the player being tripped -- Son in this case -- is responsible because he didn’t take action to avoid the opponent’s challenge.

Of course there are occasions when a lunging challenge is avoided but that was certainly not the case here. Son had no time -- or space -- to dodge Maguire’s leg. Whether it was Maguire or Son who made the first contact is irrelevant. Maguire is obviously the guilty party for stepping directly across Son’s path.

Rule 12 of the FIFA rulebook specifies that a player who “trips or attempts to trip” an opponent is guilty of a foul. It does not define, does not need to define, “trip.”

What I have described above is of course my viewpoint. I have been particularly diligent in assessing what the telecast shows. After a great many replays (around 30 trying to establish whether Maguire played the ball), repeated freeze frames, plus a good deal of exasperated cursing, my assessment is as presented above.

And my conclusion is that referee Oliver got this call badly wrong. His decision is based on an assumption, or on guess work. Or, more likely, the result of the almost feverish rush-to-judgment anti-diving atmosphere that prevails in England at the moment. Maguire did not play the ball. And Son was tripped.

My view receives support from the TV commentators. This is significant, because it is unusual. It has become a commonplace for commentators to be hawkish on diving calls, to freely accuse players of “going down too easily.” The immediate response of the commentators (play-by-play man Jim Proudfoot and analyst Andy Townsend) fit that pattern. They did not question the call. Then, quickly, came the replay and in the middle of it a sudden, surprised “Oooh! Wow!” from Townsend, and after a moment’s pause, “That’s a penalty. That is a very harsh call from Michael Oliver. Very harsh.” Proudfoot also felt that Son was hard done by: “He’s not the type of player who has a reputation for going down easily.” A rare occasion when the TV guys don’t agree with a diving call.

Barely two weeks ago I wrote about another awful diving call in England -- made against Burnley’s Ashley Barnes. A call so utterly bad it was simply laughable. I do not find it strange that, in England, experienced referees make bad diving calls. Calls that are a disgrace to the referees, to their profession, and to the sport. There will be more such calls. They will continue until the authorities come to their senses and work out a way to deal with what is actually a minor problem.

One that has been turned into nothing less than a witch hunt and a moral crusade combined. In such a heated and distorted atmosphere, is it any wonder that good referees -- afire with the desire to expose the unspeakable divers -- make horrendously bad calls? One of the more deplorable aspects of the referees position is that these calls are virtually beyond criticism. Yellow cards do not get reviewed, so referees making egregious diving calls are not likely to suffer any disciplinary action.

It is particularly depressing to see the referees not only caught up in this nonsense, but actually contributing to its spread.