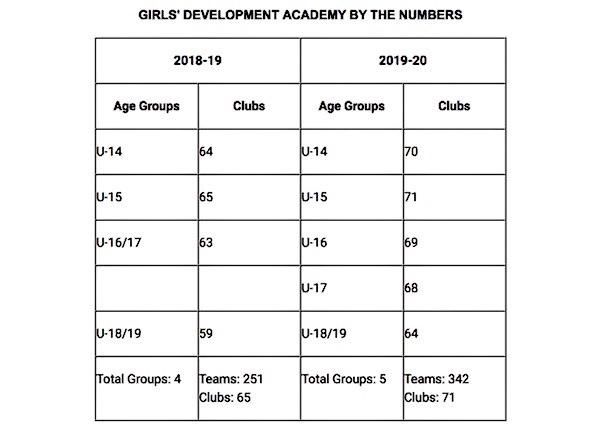 The addition of the six clubs and the age group expansion will increase the number of Girls DA players to nearly 7,000.

"After a thorough review of the everyday environments at applicant clubs, a select number were chosen to join the Girls' Academy for its third season," said Miriam Hickey, U.S. Soccer Director of Club Development, said in a press release. "It is evident that these clubs are passionate about providing opportunities for female players to have access to fun, challenging and safe environments that encourage them to reach their full potential."

After the inaugural season, three major clubs that fielded teams in both the DA and the ECNL -- New Jersey-based Sky Blue-PDA, the Michigan Hawks and the FC Stars of Massachusetts -- withdrew from the DA while remaining in the ECNL, the national girls league founded in 2009.