Tab Ramos on the U-20 World Cup: USA to face Ukraine, Nigeria, Qatar

U.S. U-20 coach Tab Ramos, on a conference call following Sunday's draw in Poland, assessed the USA's 2019 U-20 World Cup competition and addressed the dynamics of his roster selection, which will be affected by the full national team and club commitments. 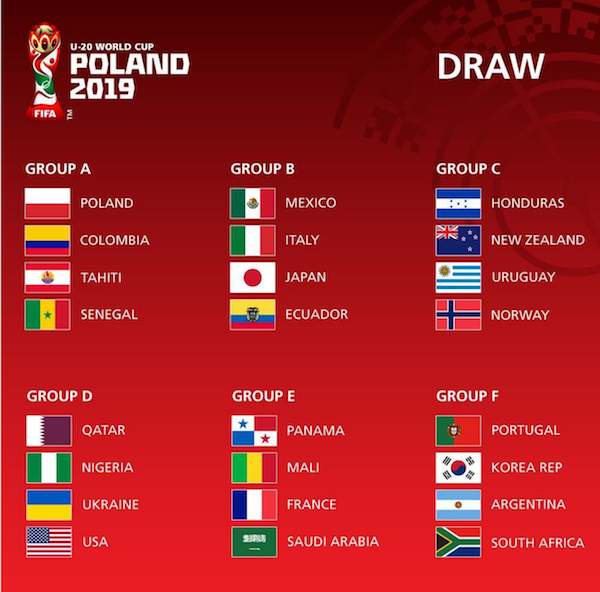 "That's a conversation that still needs to be had a little bit closer to the World Cup. That's internal, between Greg [Berhalter, USA head coach] and Earnie [Stewart, general manager of the U.S. men's national team]. And they would indicate to me what the plans would be for those players."

Ramos added that he's not expecting the availability of Weah, Sargent and Adams.

"But obviously they would certainly be welcome," he said. "At the moment, I'm preparing the players who I know I have available."

He's not concerned about the depth of his player pool.

"One of the difficulties I have with this group is when I look at my list -- and not even including players like Weah, Sargent, and Tyler Adams, and those type of guys, who have probably moved on -- I look at the rest of the list and I can't believe some of the guys who will not make the team," he said.

He hopes to have his squad together for at least 10 days before the World Cup, but is willing to make exceptions for late arrivals if necessary because of club commitments.

"The reality is, if it's a really important player to the team, and I have to wait until after that weekend of the May 19th, or around the 19th, then I'll likely to decide that it's important for the team to wait that long to get a player in," said Ramos, who is heading to his fourth straight U-20 World Cup as U.S. head coach.

"It shouldn't have any effect [on the U-20s]. In the last World Cups, even when we have full-time national team coaches at each age group, we help each other out -- but everyone is sort of in charge of their team and gathering their own staff. Fortunately, I've been in the game for a long time and I usually ask for help from outside of our own staff, as well. So guys like Brian Bliss or Curt Onalfo, guys who have a lot of experience in MLS and the professional game. And they always come and contribute. And I think this time will be the same. ... We have continued the interview process with the U-17 job and are hoping that someone will be named very shortly."

"First of all, I wasn't really worried about the draw. Certainly there are some teams I thought would be a lot more dangerous than they look by the standings where they ended. Teams that worried me a little were teams like Norway and Colombia. Colombia ended as a fourth-place team but a very, very strong South America fourth-place team. And Norway kind of the same. If you look at some of the results they achieved over the last over last year and a half, two years, with this 1999 birth year age group, it's a very talented age group. Those were teams I was a little hesitant about having in our group. The rest of them, we pretty much know them in general terms. ... The draw is a good one."

"Ukraine, although they lost in the semifinals of the European competition, they're a team that beat France on the way. You have to respect that. They're also a team that beat us pretty badly a couple World Cups ago in the third game in the group stage [3-0, in 2015, when the USA went on to reach the quarterfinals]. It's a team that has a lot of transition. They're powerful. They have speed. That's something to be concerned with."

"Nigeria is one of those teams that can always be a contender in youth competitions. I'm sure they're not here just to get out of the group. They're here to try and win the whole thing. That's obviously a dangerous team."

"Qatar has been training together more as a club team than as national team. Qatar has their Aspire Academy where their teams train together all year round. And you can see the results of that by the results of their senior team, winning the Asian Cup for the first time."

On making a deeper run than ever before:

"This is U-20 soccer, and in every cycle there are new players on every team. ... It's difficult until you get there how much of a chance you have. I can tell you, this is a very talented group that we have. And I really like it. I'm excited about it. And I'm excited to see how they're going to compete."

• The USA, which won its second straight Concacaf U-20 Championship last November, beating Mexico, 2-0, in the final, was placed in Pot 1 at the draw among the top seeds with host Poland, Portugal, Uruguay, France and Mexico.

• The USA reached the quarterfinals of the last two U-20 World Cup under Ramos. The USA's best-ever finish was fourth place in 1989, under Coach Bob Gansler.