The latter-day cult of the coach needs a rethink

The goalkeeper on the teenage boys' team that I coach was away for the weekend. No worries, we have a good back-up. Except that half an hour before kickoff, he refused to play the position, and couldn't be talked around. Eventually, one of our central defenders stepped up instead. He was badly missed in the back line, and couldn't do much in goal to prevent a 7-1 defeat.

What to do with the refusenik? I was incensed at his unwillingness to help the team, but I didn't show it in front of the players. I resolved instead to tell him later that he should find himself a new club. Then in the next few days we suffered a spate of call-offs, and I realized that I would need this player to make up the numbers the following weekend. In the end, I calmed down and accepted that the lad simply hated playing in goal.

That was a year and a half ago. I've since found out enough about the player's social and family background to make me realize it would have been a grave mistake to have reacted in a rash, authoritarian way. At the start of this season the same player asked to change from defensive midfield to forward. We worked for several months on his fitness and speed. His attitude's still not perfect, but on Saturday he played as a striker for the first time and scored two goals.

Watching Chelsea's coach Maurizio Sarri freak out on the touchline during yesterday's League Cup final against Manchester City gave me further cause to think about the role of the coach. As the world now knows, his goalkeeper Kepa Arrizabalaga -- after going down with cramp -- refused to be substituted just before the end of overtime, so Sarri blew his fuse, threw a water bottle, walked down the tunnel and then walked back to the field again. In the short gap between the full-time whistle and the penalty shootout, he had to be restrained by his captain Cesar Azpilicueta from an angry confrontation with the keeper. 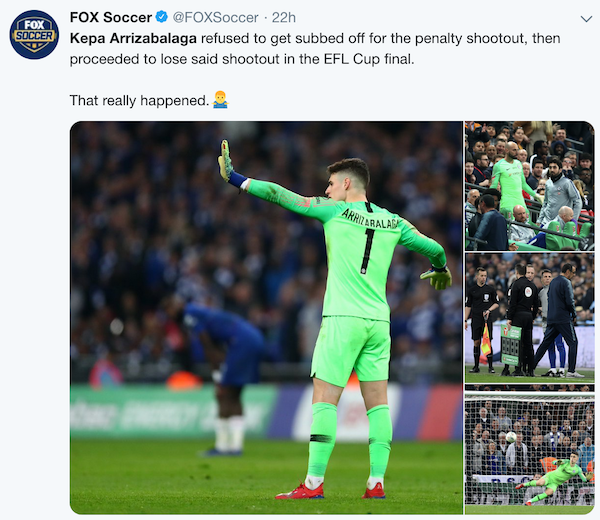 Journalists who had to sit through two hours of dreadful goalless soccer were doubtless happy that they finally had something to write about. The authority of the coach has been undermined! Likewise at Old Trafford, when Liverpool's captain Jordan Henderson neglected to shake his coach Jürgen Klopp's hand after being subbed out during his team's 0-0 draw with Manchester United. When the game's mediocre (and that is the kindest way to describe both of these much-hyped encounters), you can rely on the coaches to provide the copy instead.

Game by game, TV viewers get to see all the coach's emotions with slow-mo, high-definition beads of sweat thrown in. A near-miss, and -- who would have thought it -- they throw their hands in the air, stare to the skies and curse at the gods. A goal scored, and -- guess what -- they jump up and down and ululate and hug their assistants. We no longer have the cold, wise coaches of yesteryear who refused to even wrinkle their noses in the face of either triumph or despair. How I miss them.

The coach's ego has become too large a part of soccer's narrative. Klopp, Jose Mourinho, Arsene Wenger and Pep Guardiola are coaches who thrive on the saturation coverage. In many ways, the media has encouraged them to view themselves as the ultimate voice and face of their clubs, as the Great Men of Soccer. For the thousands who aim to imitate their success, though, I wonder if there are not more effective ways to coach a team that would slow down the huge number of dismissals at clubs impatient for better days.

The Great Men of Soccer all come with a vast back-up staff, and they all presumably spend a lot of time in conversation, so in reality they are far from standalone figures. Yet in Sarri's case, the media focus on his personality (is it really relevant how much he smokes, and how many expressos he drinks?) has made his already precarious position at Chelsea untenable, because his goalkeeper showed him up in public. Even if Sarri boasts a squad of expert assistants and advisors with a meticulous plan to improve Chelsea's performance over the next five years, it's unlikely he will now have the chance to put it into action.

An alternative for less immediately profit- and success-driven clubs could be a two-person coaching team with equal status, where it's never specified that one individual is in charge. Or why not experiment with a board of three, five or seven coaches? Where ultimate decisions are taken by consensus, not by a single mind. Where the pressure is shared, and the fate of a team does not ride on the caprice of one man's ego. Where a change of direction is seen as a positive reaction, not a loss of face. Where more reason, stability and a long-term vision replace the rush for immediate results.

And where we stop treating coaches like they are the high priest of a colorful cult. Then the minute things backfire, we chase them out of temple and town.

The professional coach has to be a tactical maestro, a smart communicator, a savvy psychologist, and a vent for extreme emotions. It's all too much for one person. Most of all, there is a prevailing macho culture where they still think that they have to be the strongman. They have to be seen to be in charge, and -- to use that fatuous cliché -- not to have "lost the locker room." I think that's more of a hindrance than a help. Has the time arrived to consider a more collective approach to coaching?

In my own somewhat minor case, I realized that making snap decisions on my own and playing god was poor practice. That it was irrelevant to the team if my ego was hurt. Since the start of this season, I've had the fortune to work with a smart and ambitious young co-coach. The path forward's still arduous, and a certain amount of discipline still necessary, but sharing the burden and responsibility leaves me with fewer sleepless nights. Although I have no idea how people who coach for a living ever get to sleep at all.

england, youth
2 comments about "The latter-day cult of the coach needs a rethink".
Read more comments >
Next story loading