Concacaf Champions League: How many MLS teams will go through? 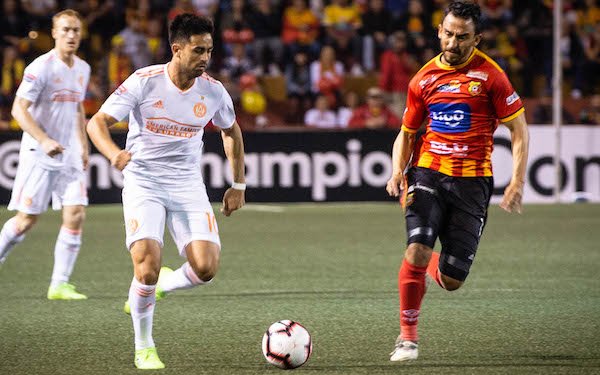 The Scotiabank Concacaf Champions League resumes this week with the second leg of the round of 16.

Three of the five MLS entrants won their first legs. The other two -- the last two MLS champions -- lost.

How many will go through to the quarterfinals? Here are our odds:

(The MLS record is four quarterfinalists, set in 2016 when teams qualified via group play, and they all proceeded to lose.)

Tuesday: Houston Dynamo vs. Guastatoya (1-0). A late goal by DaMarcus Beasley put the Dynamo in an excellent position to advance, even if it struggled in its first competitive match of the year.

"Our job is to go out there put on a good performance and put a good shift in and try to win the game," says Beasley. "We would never use us only having one game -- that was our first game of the season -- instead of eight as a reason why we are not playing well. But yeah, that’s normal, tired legs, heavy legs, after the first game of the season."

One worry for Houston: Juan David Cabezas is again injured. He was injured in the 2018 MLS opener and limited six appearances, leaving a big hole in midfield that was never filled.

Tuesday: Toronto FC vs. CAI (0-4). Temperatures could be in the teens by kickoff at BMO Field. In normal circumstances, that should give the Reds enough of an edge to win comfortably against the Panamanian newcomers, but a comfortable win won't cut it.

TFC needs to win and score at least four goals. Only four MLS teams have scored as many as four goals and no team has ever scored five or more goals in the CCL's knockout stage.

"It’s going to be uncomfortable," says TFC coach Greg Vanney. "I would think for the opposition so we just have to give them reason to doubt themselves a little bit."

Wednesday: NY Red Bulls vs. Atletico Pantoja (2-0).  This is the third season in a row the Red Bulls have played in the knockout stage. In 2017, they lost to Vancouver. In 2018, they won two round and reached the semifinals before losing to Guadalajara.

Head coach Chris Armas says the difference between the two seasons was how the Red Bulls approached preseason, and that approach taken last season has put them in a position to again advance to the quarterfinals, where a Mexican team, Santos, awaits.

One factor in the Red Bulls' favor last season was they were able to rotate their lineup -- something Armas will probably want to do again with the start of the MLS season this weekend in mind.

Thursday: Atlanta United vs. Herediano (1-3).  As bad as things went in Heredia -- and they were a mess -- the Five Stripes escaped with just a two-game loss and an away goal.

In Atlanta's favor is the record of MLS teams against Costa Rican opponents on home soil: four wins in four games in the CCL knockout stage. (Only D.C. United in 2015 won at home and didn't advance.) Coach Frank de Boer will likely make some lineup changes. Darlington Nagbe, held out of the starting lineup, helped settle the midfield in the last half hour of the first leg after he entered for Ezequiel Barco.

Home for Atlanta won't be Mercedes-Benz Stadium, though. MBS is being set up for Saturday's Supercross, so the game will be played Fifth Third Bank Stadium on the campus of at Kennesaw State University.

Thursday: Toluca-Sporting KC (0-3). How bad has the last 10 days been for Toluca? Its 3-0 loss to Sporting KC was sandwiched between 3-0 and 4-0 losses in Liga MX. With its winless streak now at seven games, Toluca fired head coach Hernan Cristante on Monday.

The troubles Los Diablos Rojos are experiencing should make Sporting KC the prohibitive favorite in the second leg. There is just one small problem: The second leg will be played in Toluca at altitude of 8,750 feet.