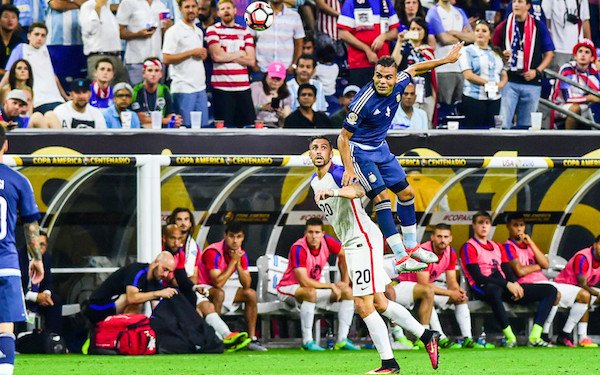 The 2016 Copa Centenario celebrated the 100th anniversary of the Copa America, but it was conceived by South American federation presidents and Conmebol and Concacaf leaders in conjunction with Datisa, a consortium of South American marketing agencies, as a scheme to line the pockets of these soccer executives to the tune of tens of millions of dollars.

The criminal enterprise was broken up in 2015 when Federal authorities issued indictments against and obtained plea agreements with dozens of soccer officials. The 2016 Copa Centenario still went off, and U.S. Soccer organized the tournament.

The 2016 Copa Centenario proved to a huge popular and commercial success. Average attendance topped more than 46,000 a game, making it the most attended Copa America in the tournament’s 100-year history, and more than 100 million U.S. viewers have watched games on the Univision and Fox networks. Ticket revenue alone topped $175 million, and U.S. Soccer's share of the  profits have exceeded $72 million.

U.S. Soccer has presented a proposal to organize another Americas tournament. The New York Times first reported on Tuesday that the federation has sent letters to Conmebol and Concacaf to organize a 16-team invitational tournament in 2020 with all 10 Conmebol teams and six Concacaf teams -- like in 2016.

U.S. Soccer has offered almost $200 million in guaranteed payments, bonus money and expenses to the two confederations and 15 other federations. The 2016 tournament brought in revenues of almost $220 million, and a second edition would conceivably generate even more money.

In 2020, FIFA is expected to decide the venues for the 2026 World Cup, and the host cities of an Americas tournament would be under pressure show off what they can offer in terms of support and organization, just like San Francisco/San Jose, Orlando and Houston, sites of U.S. men's friendlies in the early part of 2019, are now.

Concacaf issued a statement on Tuesday, saying it viewed "this opportunity positively as it is not intended to replace or substitute any future editions of the Concacaf Gold Cup and it complements our vision to continue providing opportunities for our member associations to play competitive football at the highest level.”

Trickier will be the response from Conmebol. In 2016, the South American federations were reeling from the federal indictments that affected Conmebol itself -- three successive presidents were indicted -- and executives from 10 federations. They had little choice then but to accept the terms U.S. Soccer offered.

Conmebol already has plans to move the quadrennial Copa America from odd years -- the 2019 edition will be played this summer in Brazil -- to even years -- beginning in 2020.

FIFA has approved the switch, but Conmebol has not named a host country for the tournament, suggesting it is hoping to negotiate a deal with U.S. Soccer and Concacaf.

FIFA would need to approve an enlarged Americas tournament and place it on its official international calendar in order for clubs to be required to release players to all 16 national teams. In September 2014, FIFA approved the Copa Centenario as an official event and added it its calendar.