The USA, 100 days ahead of the 2019 Women's World Cup, gave up the lead twice to settle for 2-2 tie with Japan in its first of three SheBelieves Cup games. After a strong start, Coach Jill Ellis' team lost its cohesion in the second half and gave up the second equalizer in the first minute of stoppage time. Next up for the USA: England on Saturday.

GOALKEEPER
Alyssa Naeher had no chance on the first goal, a sharp strike from 13 yards, but losing her footing prevented her from blocking Yuka Momiki's close-range shot in the 91st minute. No other saves were necessary as Japan's only other decent shot, by Kumi Yokoyama, hit the crossbar, in the 11th minute.

DEFENDERS
The USA's opening goal buildup started with smooth passing along the backline, and in the first half the aggressive play of outside backs Kelly O'Hara and Crystal Dunn helped the Americans control the rhythm and dominate possession. A different story in the second half, when a much improved Japan applied more pressure, and the Americans lost their cohesion and began to look vulnerable in the back. Tierna Davidson cleared the ball straight to Momiki, who took full advantage to make it 1-1 in the 67th minute. The second goal came straight down the middle. Dunn moved in to help but was unable to interfere.

MIDFIELDERS
Mallory Pugh combined nicely with right winger Tobin Heath, including the pass on the first goal, when Pugh received the ball from Julie Ertz. But Pugh faded badly in the second half before getting subbed. Similarly to when France beat the USA 3-1 in January, the Japanese in the second half figured out they could stretch the three-player U.S. midfield and limit the USA to flank attacks as Ertz had too much ground to cover to create through the middle. On Japan's second goal, Ertz's futile slide to intercept a pass left her on the ground as the Japanese stormed toward the goal. Rose Lavelle's impressive moments on the ball weren't game-changers. 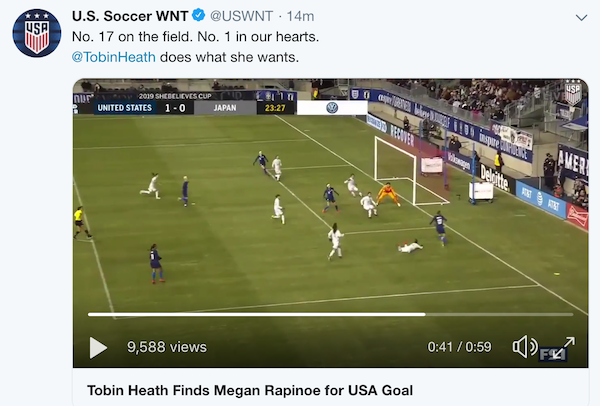 FORWARDS
Megan Rapinoe squandered a breakaway set up by Alex Morgan's through ball early in the game but pounced to the right place to stroke home Tobin Heath's pass on the first goal. Heath's right wing foray shortly after kickoff was the first of many that unsettled the Japanese. Morgan's heavy touches prevented her from unleashing shots twice in the second half, but she made it 2-1 by deflecting off her chest Christen Press' cross.

SUBSTITUTES
Emily Sonnett replaced O'Hara at right back after the halftime break. The arrival of Christen Press (replacing Pugh in the 75th minute) swung the momentum back to the USA for a short while and her assist was excellent. Carli Lloyd, an 85th-minute sub, had the last shot before the final whistle -- straight to goalkeeper Erina Yamane.

TRIVIA: In 37 meetings, the USA has only lost once to Japan. It's won 28 of the clashes and tied eight. (The 2011 Women's World Cup that Japan won in a PK shootout is officially considered a tie. In two world championship finals since, the USA beat Japan 2-1 for the 2012 Olympic gold medal and 5-2 to lift the 2015 World Cup.)